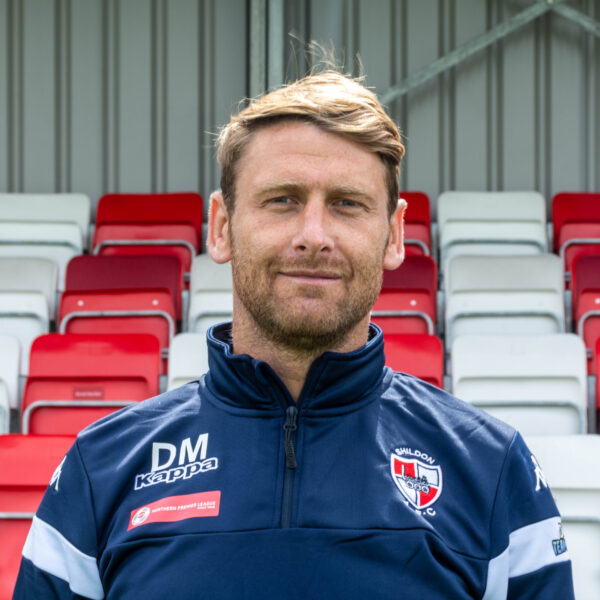 Nicknamed ‘Bobby’, Daniel Moore age 34 originally from Mansfield, now Hartlepool, first played for Mansfield Town until he enlisted in the army.  Daniel proudly gave eight years’ service in the Infantry unit The Royal Regiment of Fusiliers completing two tours of Afghanistan, one of Iraq and one of Kosovo and lived in Northern Ireland for two and half years.

A transfer to Catterick brought him to the North East where he played for Shildon, Spennymoor Town, Celtic Nation and of course a return to Shildon AFC where he has played close to 500 games.

It was at Shildon that he got his big break into management signing a three year contract with the club.  Since his appointment in January 2017 he has taken Shildon to 4th position in the Northern League, in his first season, and 3rd in his second.  He took Shildon to FA Cup 4th qualifying round last season and won the Cleator Cup.

“I hope to see us finish 4th this season and progress in the FA Vase, but most importantly continue to give the young players a chance on the pitch”

As a former FA Vase winner with Spennymoor Town Daniel famously climbed Wembley steps to lift the trophy in 2012-13. Something he hopes to repeat (without the broken leg)
Daniel currently plays and manages Shildon and brings experience and that winning mentality having won the Northern League four times.

“there’s nothing better than to be a part of a club so close to my heart, and so full of ambition and dedication”

When he’s not at a football ground or at work the devoted Dad to Ava and Maximus can be found spending time with his family and on a sun lounger in a warmer climate.