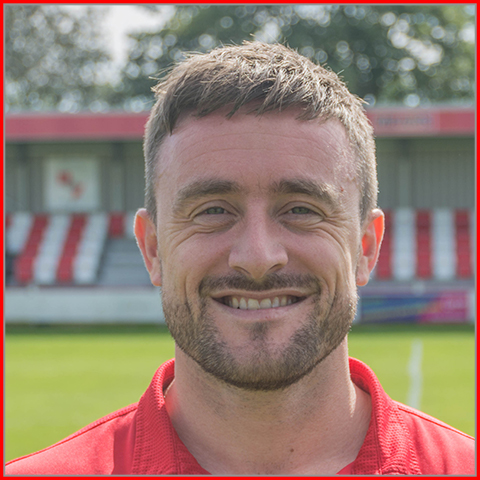 Matty Robson or ‘Robbo’ is a familiar face in the Shildon line up as a defender/midfielder.  Growing up in Coxhoe he spent his youth watching his Dad play for Coxhoe Athletic in the Durham Alliance League.  Finding any spare time to kick a football from the age of 9 he finally got his break aged 17 for Hartlepool United against Tranmere Rovers.  From there he went to Carlisle United and Gateshead FC.

Dad to 5 year old Finlay and currently living with girlfriend Claire, you will nearly always see him coming out third in the line up on match days – although he says he doesn’t believe in rituals!  He looks up to several of the players like Dominic, Billy and Dale…for no other reason that he’s a little shorter than them and admits he’s not cool enough to have a goal celebration so will leave that to Billy.

“I know and respect the lads in the team, we have become like family which means I enjoy playing even more”

“Playing football has given me some great opportunities including playing at Wembley and the Millennium Stadium in Wales.  Something I will never forget!

When Matty’s not on the pitch he can be found on the golf course, relaxing at home or enjoying good food and wine (not near match days of course!)