The Shildon AFC Supporters Club was re-formed in December 2009. Its aims, among others, were to increase interest in Shildon AFC thereby expanding its fanbase and hopefully increase attendance figures; to provide transport to all away games and to assist Shildon AFC and other organisations and charities financially, where possible. The club has adopted a formal constitution and more information about this is available on the News section.

As a result of the membership’s vote to adopt a formal constitution, membership of the Shildon AFC Supporters Club is now charged on an annual basis. Membership is £5 Adults (over 18) and £3 juniors (under 18).  Only current members will be able to vote at the club AGM. The renewal date for membership is the month of September.

People wishing to travel to away games can do so by contacting Russ on 07538 789464 and he will pass on any bookings.  Transport arrangements for the new season will be updated on this page soon. Please also check the News section for any updates.

Please try to book well in advance. This gives us time to book larger buses if necessary as we do try to accommodate everyone where possible.

If, for any reason you are unable to take up your seat on any transport, then PLEASE let us know as soon as possible so that we can try to fill your seat or avoid waiting around for you to turn up.

This only delays people getting to the game on time and as we run the buses on a small profit margin can cause us to run a bus at a loss.

Owing to people not turning up for away travel after committing to travel, a Non-refundable deposit will be taken prior to your name being added to the list of travellers.

We are compiling a map of Shildon shirt wearing supporters around the world.  If you would like to be inlcuded within our map please send the location and a picture of you/friends/family wearing the shirt. 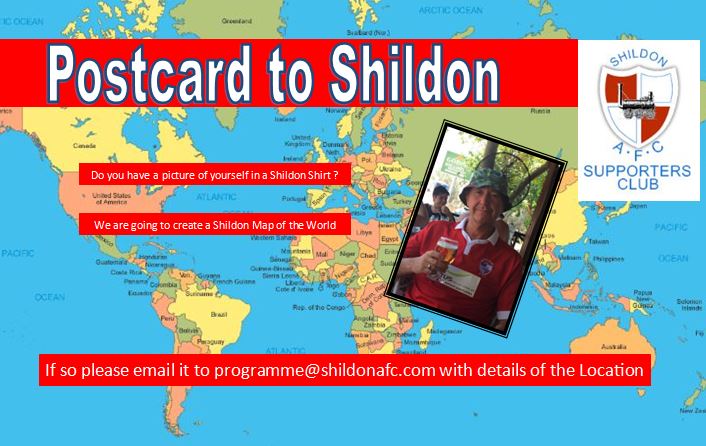