A warm welcome was extended to Shildon AFC on their first game of the season at Eastbourne Sports Complex.  Shildon AFC produced a great team effort, which gave them a brilliant 13 -0 lead. Noah scored from the half way line from a free kick in the 14th minute. Sam scored from a back heel pass from Noah to score a brilliant goal. Zander Caygill was unlucky not to score from a powerful shot saved by Middleton Rangers goal keeper.  Shildon AFC goalkeepers made great saves and this ensured kept Shildon a clean sheet.

A very tough 1st half, Shildon had a lot of shots at goal saved and went into half time 2 nil down. As soon as the 2nd half kicked off, Shildon turned on the pressure and the goals began. Shildon passed the ball really well and their defence was rock solid. A great start to the new season.

Man of the match – Jamie Donohue

The newly formed Shildon AFC U9’s played their first ever match together on Sunday at the Scout field and showed real potential against a well organised Ferryhill Youth.
The side took the first half getting to know each other so it was no surprise they went in at half time 6 – 0 down.  However from then on the team started to blend together and were the better team for long periods. 2 goals from Kian Dixon and 1 from Michael Gaffney brought the Shildon side back into the game. Cole Layfield and Anthony Jary were running riot on the wings. Kai Chadwick and Caitlyn Lawton were now looking solid in defence and stopped the Ferryhill attack on many occasions giving Shildon the chance to counter attack. The game finished 9 – 3 to the visitors.
The second game was a much tighter performance. Ashley Jardine entered the proceedings and immediately made his presence felt.  Two more well executed goals from Kian Dixon and fine lob from Michael Gaffney rounded off the scoring for Shildon. The team put in a fine performance and show real potential for the future.  Man of the Match was Jamie Donohue in goal who pulled off a string of fine saves throughout both games.  The final score 3-3 which was the very least they deserved.  Well done all the players. 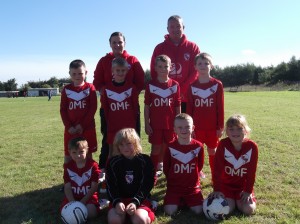 Shildon produced an excellent start to the season with a solid all round performance, scoring in the 7th minute by a good right foot shot by James Rusby.  In the second half a header by Kane Hopwood doubled the lead.  After a perfect through ball James Rusby netted his second goal.  With 5 minutes to go a thunderbolt strike from 20 yards gave Kane Hopwood his 2nd goal.  On the side line Lee Race kept control of the game + himself!