U16’s win their first ever match

Man of the match – Xander Caygill

This week found Shildon back on form, with a strong performance from all the team at home to Mount Pleasant.

In the first half, Shildon attacked well with the defence and goalkeeper Amelia Clarkson ensuring a clean sheet.  At the top end, Sam Hopper with a brace, John Taylor with 2 and Noah Fawcett gave the hosts a 5-0 half time lead.

A couple of substitutes didn’t affect the goalscoring, with Christian Robinson and Charlie Brown both scoring, as well as Noah Fawcett netting a further 2 to record a hat trick. 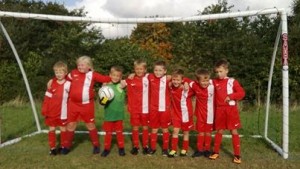 The Shildon Under 8’s played at home against Darlington TSC.  After losing their last couple of games the boys were keen to get underway and Jack Milner set the pace in the first two minutes of the game by firing in two great goals.  Some great, attacking football was played with the forwards playing really well together.  The few times that the ball was in Shildon’s half the defensive team were rock solid, nothing got past them. Three superb goals from Jack Leighton put the Shildon boys five goals to nil at half time.

Shildon continued to dominate in the second half, and the goals just kept on coming.  Jack Leighton found the net a further three times, Jack Milner scored another two and Jake Sharp and Ben Moore each had one.  Darlington managed to score a single goal making the final score 11-1 to the Shildon boys!

The full nine Shildon players took to the pitch for the friendly and it was more of the same. Jack Leighton scored three goals and Jack Milner, Will White, Ben Moore and Jake Sharp all found the back of the net.  The final score was  8 0 with Jake Baldwin gaining the man of the match trophy.

The U9’s travelled  to Hartlepool this week with only 7 available players and faced a formidable St Francis, who had a large squad to choose from.  This was always going to be hard game under the circumstances, but to the credit of the players they started well, however, they were two behind in quick succession.  Shildon pulled a goal back  soon after but with St Francis having the ability to roll on fresh legs the writing was on the wall.  Every Shildon player fought hard but as they tired St Francis gained the advantage with a final score of 10 1.

In the second match Shildon played a well deserved one all draw.  The man of the match for the second match was Ashley Jardine who has made good progress since making the step up to the U9’s.  The new team faced there stiffest test yet today but kept there heads up and never gave in.  Well done all and keep improving.

Man of the match – Owen Burke

Shildon travelled to local rivals Aycliffe Youth, and were on the wrong end of some disappointing refereeing decisions.

Shildon started brightly, and were unlucky not to score on several occasions.  Mid way through the first half, Aycliffe went ahead via an own goal.  Early in the second half, Shildon levelled the match with a good shot from Hopwood.  This was shortly followed by a hotly contested penalty award to Aycliffe, which was duly dispatched.  Shildon upped the game again and Hopwood got his second of the match to draw the teams level again.  As Shildon piled on the pressure for the winning goal, a seemingly clear hand ball was missed by the ref and Aycliffe took full advantage as they scored.

In the friendly match, Shildon got some revenge with a 5-1 victory

Man of the Match – Cain Smith

Shildon played host to Greatham B, in what proved to be a very evenly matched game.  The first half had a few chances for both teams, with Tom Andelin shooting just wide of the left hand post Cain Smith outstanding in the heart of Shildon’s defence.  Greatham finally took the lead just before the interval, to go in 1-0.

A few minutes into the second half, Greatham extended their advantage as they broke clear of the offside trap and gave the keeper no chance, to make the score 2-0.  Shildon started to apply pressure and had a number of corners, from which they almost scored, with Greatham clearing off the line.  They finally got the reward for persistence when Jack Mortimer slotted the ball into the far corner.  Greatham responded and scored what was to prove to be the winning goal.  Shildon came fighting back though, and Jack Mortimer scored his second with a great free kick from the edge of the box.  A number of chances came Shildon’s way in the dying minutes but they just couldn’t convert.

Shildon U16’s travelled away to Cleveland Junior Falcons and, in very windy conditions, recorded their first ever victory

Michael Douglas opened the scoring in the first half, with Reid Huntingdon doubling the lead just before the break.  Shildon came out for the second half, and dominated proceedings.  After 20 minutes, Michael Douglas got his second of the game to extend Shildon’s lead.  Against the run of play, Falcons broke with a one on one, however, keeper Matthew Franklin was up to the task, pushing the ball around the post.  With 10 minutes left, Lewis Robinson struck a shot from 40 yards, which flew in to the top left hand corner.

A great result for a great bunch of lads – well done