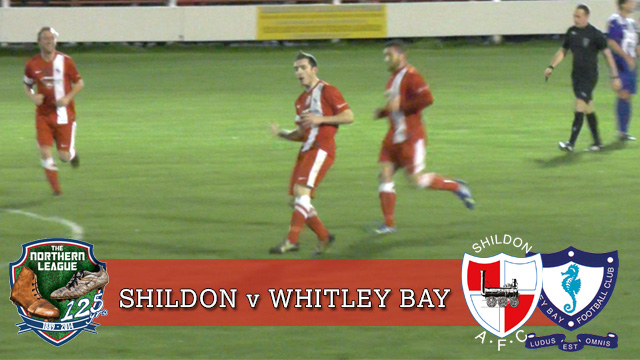 Ten-man Shildon returned to the top of the league tonight after a hard fought draw at Dean Street against Whitley Bay.

New signing, Craig Ruddy was in the starting line up while Lee Kerr, who also signed yesterday from league rivals, Spennymoor Town, started the match on the bench.

Shildon took the lead in the eighth minute with a wonder goal from Ben Wood, who unleashed an unstoppable shot from 25 yards.

But the match turned when referee, Paul Newhouse adjudged that Jamie Harwood’s brush against Alex Kempster was worthy of a penalty – a decision the Shildon defender felt was harsh.

However, having awarded the spot kick, the official was left with no option but to issue a red card to the last defender and force the Railway to survive the remainder of the match one player short of their opponents.

Paul Chow confidently dispatched the penalty past Keith Finch, who continues to stand in for the injured Lewis Graham.

Shildon did survive. Indeed, at no time did they come under particularly heavy pressure, bar a frenetic final few moments, as the well-earned point loomed large.

Lee Kerr made his debut, replacing Ben Wood in the second half, but the prolific scorer was unable to make an impact with the Railwaymen wisely unwilling to commit recklessly forward.

In the end, the point ensured the Railwaymen returned to the top of the division.

Next up for Shildon is Ashington, who visit on Friday night for the Railwaymen’s sixth league match in a row at Dean Street. A win will almost certainly secure top spot for another weekend.