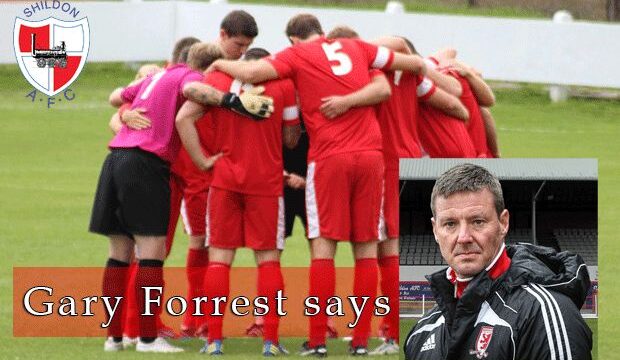 In the wake of Shildon’s exit from the FA Vase on Saturday at the hands of West Auckland, who won by the game’s solitary goal, Shildon manager, Gary Forrest has released the following statement:

“I would like to take this opportunity to sincerely thank all the people who turned up on Saturday and gave us such fantastic support, we could not have asked any more of you.

“If we are all honest it was a dreadful game in which both teams cancelled each other out, and it appeared like both teams were too frightened about losing to actually take the game by the scruff of the neck and go for the win.

“That was one of our poorest performances of the season. Of all the games in which to put in such a poor performance, we chose that one. After such a poor performance, I tend to sit and analyse the game and attempt to work out what we did wrong and what we could have done better. I genuinely cannot fathom out why we performed so badly and have come to the conclusion that it was just a really bad day at the office!

“I know the players are hurting today and feel that they let themselves and the supporters down, but we need to put this behind us and focus all our energy on challenging for the league title. Please don’t lose faith in us as we need to do this together.

“Over the last six years we have all worked really hard to build a fantastic football club with solid foundations. The club goes from strength to strength; we have a great supporters club, youth development set up, the best social marketing and the ground looks superb in comparison to six years ago.

“I would love to deliver silverware to the club as it appears to be the missing piece of the jigsaw. However, we will NEVER sacrifice our principals of playing attractive passing football. This season we have scored 61 league goals in 22 games and some of our football has been fantastic at times. Yes we take risks, yes we conspire to beat ourselves at times by attempting to play football on poor surfaces and in difficult conditions, but it is the way we believe a football team should play.

“So let’s put Saturday behind us and move on to another tough game at Crook on Friday night. If we manage to pick up three points on Friday we will extend our lead over Celtic Nation to seven points, Spennymoor to 9 points and West Auckland to 14, with both Spennymoor and West playing each other the following day.”