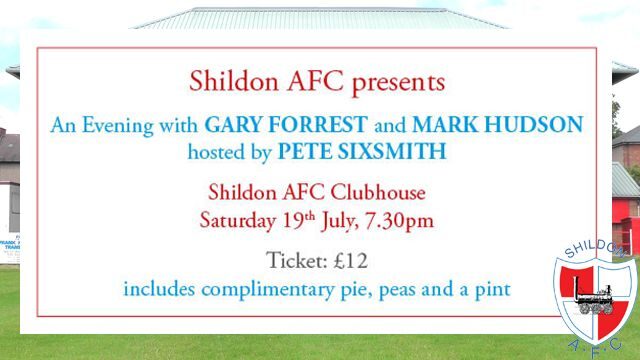 An Evening With Gary Forrest and Mark Hudson

Local Northern League football expert, Pete Sixsmith will be the host when Shildon AFC manager, Gary Forrest and club captain, Mark Hudson, make themselves available for a night of football conversation with a question and answer session about the forthcoming Northern League season.

The event gives Shildon fans old and new the opportunity to quiz the gaffer and captain about the club’s plans for the coming season and to hear stories from their time in football.

Mark Hudson has played at every level of the game, starting his career in the English Premiership with Middlesbrough. Last season he held aloft the Durham Challenge Cup – Shildon’s first major silverware for a decade and the first time the County Cup has been back at Dean Street for 41 years.

The trophy, which will be on display on the night, is the first in Gary Forrest’s reign as manager, and the club expects to go from strength to strength now that the hurdle of the first silverware has been overcome.

Gary will be talking about the new players coming into the side and revealing his ambitions for the season and how they coincide with the recent three-year plan published by the club.

A spokesperson said, “There are a limited number of tickets for the event, which are selling quickly, so be sure to book yours as soon as possible to avoid disappointment. Tickets are just £12 and include complimentary pie, peas and a pint.

“With his deep knowledge of the Northern League and football in general, we are delighted that Pete Sixsmith will be hosting this event and we’re sure he’ll mange to get Gary and Mark to reveal some interesting stories from their time in the game.”

The event takes place at Dean Street clubhouse on Saturday, 19th July from 7.30pm; the day after Shildon play Scottish League One side, Stranraer FC in a home pre-season friendly. Tickets can be booked by calling 07538 789464.