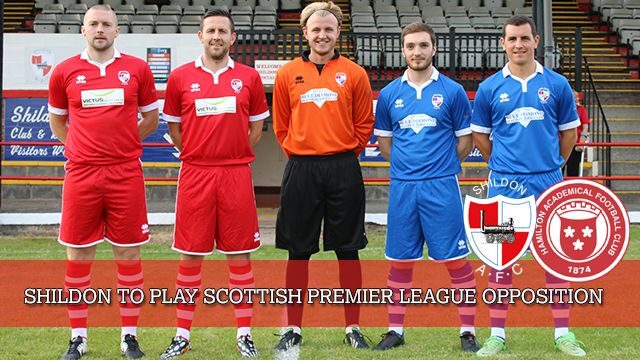 Pay what you can to see Shildon v Hamilton Accies

Shildon have secured a late addition to their friendly schedule in the form of Scottish Premier League opposition.

Hamilton Academical FC will be the visitors to Dean Street next Saturday, 26th July in a special Community Friendly.

Instead of the usual entry fee, Shildon are opening the gates and asking the community to ‘pay what you can’ for this game.

Hamilton Accies created a sensation in Scotland last season when they famously relegated Hibernian in an end of season playoff, consigning the Edinburgh club to the Scottish Championship alongside their city rivals Hearts.

Having lost the first leg of the match 0-2 at New Douglas Park, Hamilton travelled to Edinburgh and Easter Road with a monumental task ahead of them.

An early goal from Jason Scotland gave the visitors hope, but as the clock ran down, it looked like Hibs would survive. Then, in the last ten seconds of normal time, up popped Anthony Andreu to level the aggregate scores and take the match to extra time.

With no further score in the tie, the match went to penalties and it was Accies who prevailed, winning the shootout 4-3 to record one the most sensational results in modern Scottish football history.

Now Shildon will have the opportunity to play the Premier League new boys in what will be the sternest test of their pre-season schedule. Kick off at Dean Street is scheduled for 1pm and the club hopes that with a pay what you can entry fee, the community will turn out in numbers to support the Railwaymen.