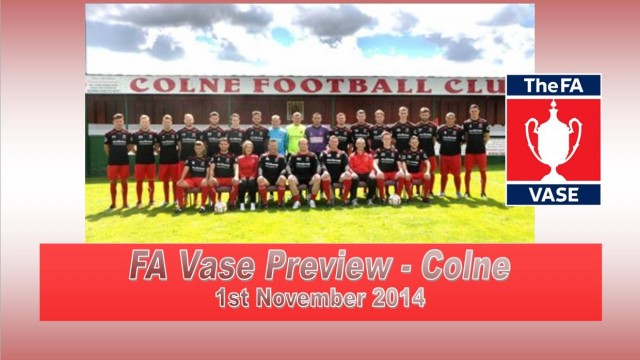 After the disappointment of Wednesday night’s FA Cup exit, Shildon re-join the road to Wembley on Saturday with an FA Vase away day at Colne FC of the North West Counties Football League Premier Division.

The Railwaymen’s opponents sit mid table in their division but have won their last three matches in a row, all away from home: two in the league and one in the cup, including a 5-1 win over fourth placed AFC Liverpool.

Less than 20 years old, the Reds, as they are nicknamed, were established in 1996 and play at the Holt House Stadium in Colne, Lancashire, a ground previously used by Colne Dynamoes who progressed to the highest levels of non-league football before folding in 1990.

The club’s largest home attendance of 1,742 came in an FA Vase Semi-final replay against AFC Sudbury in 2004 which the Reds lost 4-3 on penalties after a 1-1 draw in the match. The club’s average attendance last season was 95.

So far this season the club has progressed through the qualifying rounds by defeating two Northern League sides in Penrith and Heaton Stannington, so the Railwaymen, who are joint favourites in the tournament, will need to be on form to ensure they are not the Lancashire side’s third Northern League scalp this season.

While Shildon will still be hurting from Wednesday’s FA Cup loss, Colne will know that the Railwaymen will want to take their frustrations out on the NWC side, and Shildon will be in no mood for an early exit from the competition. Billy Greulich-Smith remains a doubt for the game, but otherwise, Shildon should have a full compliment to choose from.

The match kicks off at the Holt House Stadium at 3pm and there are some places remaining on the supporters bus for anyone wishing to travel. The coach leaves the car park behind the George pub at 9.30am on Saturday. To enquire about seats, call 07784 975451.