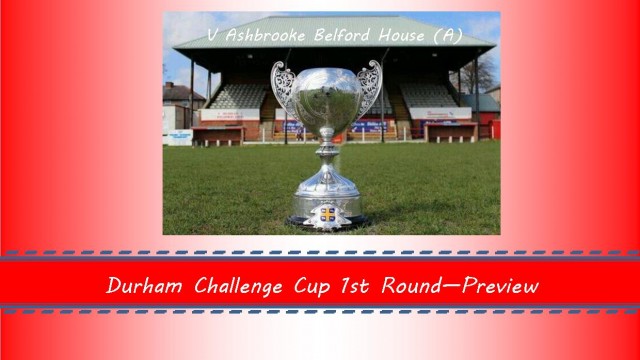 Shildon’s defence of the County Cup gets underway tonight as they visit Ashbrooke Belford House in the First Round of the tournament they won last season for the first time in over 40 years.

Two late Billy Greulich-Smith goals in the final against Spennymoor, the second in injury time, saw the Durham Challenge Cup hoisted by the Railwaymen for the first time in a generation.

If ever the old cliche of “their name was written on the cup” could be said to be true, it was surely Shildon’s name on this cup last season.

The side had to negotiate extra time in each of the first three rounds, surviving a penalty shoot-out at Norton in the first round in which Keith Finch had to save two penalties to keep Shildon in the tournament and avoid a humiliating early exit. His display was later rewarded with the Performance of the Season Award from the Supporters Club.

Further extra time wins against Seaham Red Star and Dunston were followed by a comfortable 3-1 home win against Consett in the semi-final to set up that now famous summer showdown against Spennymoor at Billingham Synthonia.

Tonight’s opponents play in the Wearside league at Silksworth Park in Sunderland. The club currently lies 10th in the Wearside League with 20 points from their 17 games played. They enter this tie on the back of two away wins in the league where they have scored seven and conceded two.

Admission to tonight’s match is just £3 adults and £1 concessions. Kick off is 7.30pm. Directions to the ground and a clickable map can be found here.