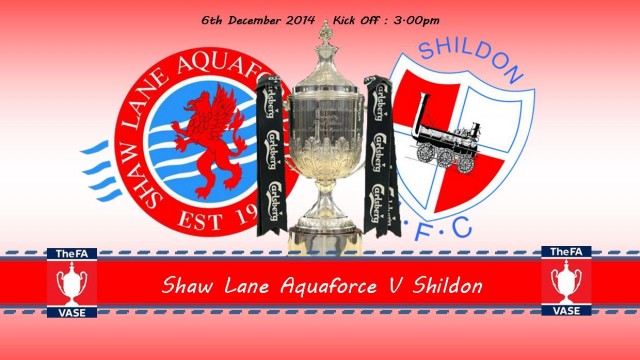 Shildon have been drawn away to Shaw Lane Aquaforce FC in the 3rd Round of the FA Vase.

The supporters club will be arranging transport to the game. People wishing to travel can do so by seeing Winnie in person on match days or by calling her on 07784975451.Alternately you can call Russ on 07538789464 and he will pass on any bookings.

Owing to people not turning up for previous away travel a £10 Non refundable deposit will be required to secure you a seat.

The Barnsley based club, formed in 2012 as an amalgamation of three local clubs, currently sit second in their division, some way behind runaway leaders Tadcaster Albion.

While the club traces its roots back to the formation of an under 11 side in 1991, Shaw Lane have had somewhat of a meteoric rise in recent years, moving through the Sheffield & Hallamshire County Senior League Division One after its first merger in 2011 before winning the Premier Division after its second merger in 2012 and gaining promotion to the Northern Counties East League (NCEL) Division One. A year later their meteoric rise continued when they finished runners-up in the NCEL Division One, winning promotion to the Premier Division.

Now their rise continues with major scalps in the FA Vase and if Shildon are to continue their quest to win the competition and merit their selection as bookie’s favourites, they will have to travel to the Shaw Lane ground and overcome the side whose name is on everyone’s lips at the moment.