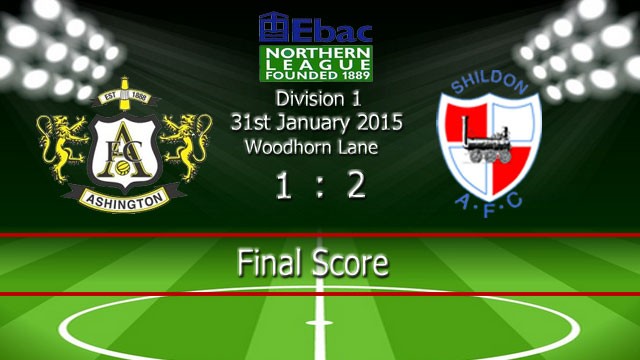 The weather played havoc with the league fixtures on Saturday 31st January 2015 with only Shildon’s away match at Ashington and West Allotment Celtic v Billingham Synthonia going ahead.

The Railwaymen are now 6th in the league with games in hand on all the teams above them after they ground out a 2 – 1 win at The Colliers.

Shildon opened the scoring on just 4 minutes when a left footer from Ben Wood flew into the roof of the net beating keeper Kyle Barnard.

Shildon could have extended their lead through Paul Connor and Mark Doninger, before Ashinton came more into the game and looked threatening. Tony Stephenson blasted over, Andrew Johnson went close and ex Shildon player Ben Christensen was denied by keeper Kyle Hayes.

Ashington pressure finally paid off on 39 minutes when captain Andrew Johnson beat two defenders in style and smashed the ball from 20 yards past Kyle Hayes for 1 – 1.

Shildon manager Gary Forrest’s harsh half time talk must have made an impression as Shildon were a far better outfit in the 2nd half, taking the lead on 56 minutes when a free kick from Lee Chapman was fired in from close range by ex Ashington player Liam Atkin.

In the 2nd half Ashington were restricted to only two chances. On 75 minutes Marc Walton blasted just over and in time added on Kyle Hayes saved at point blank range from Andy Ferrell.

After the match manager Gary Forrest said “This wasn’t a very good game of football. The playing conditions were quite difficult, with an uneven playing surface and strong winds, it was never going to be a classic, but in the end we ground out a result”.

The league title is still wide open, with several clubs still in the hunt. Shildon’s next 4 games in February could have a big influence. On Wednesday 11th February the Railwaymen are away to Newcastle Benfield. Then they have 3 home games. On Saturday 14th February they entertain high flyers Marske United, and then play Sunderland RCA on Saturday 21st February, followed by local rivals West Auckland Town on Saturday 28th February.