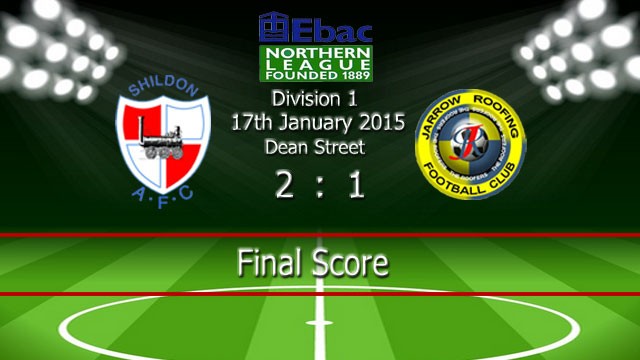 Shildon AFC entertained 5th place  Jarrow Roofing on Saturday 17th January 2015 and despite only winning 2 – 1 they  should have won by a far greater margin.

In his match review before the match, Roofers manager Richie McLoughlin, who tipped Shildon to win the league, said he would not be intimidated by the size of the challenge facing his side today. He said Shildon are a top club with top players. He said his game plan was to stop Shildon playing. Well, it didn’t go to plan, as Shildon controlled the game from the kick off.

The Railwaymen started strong and had 3 early chances from Mark Doninger, Mark Hudson and Micky Rae, before Roofer’s Malcolm Morien was through but keeper Kyle Hayes saved brilliantly with his feet.

Against the run of play Roofers went 1 – 0 up on 36 minutes when a cross from the left was fired home from close range by Paul Gardiner.

Despite having nearly all the possession the Railwaymen went in at half time a goal down.

More early pressure from Shildon saw keeper Hunter punch over a Billy Greulich-Smith bender. The keeper was having a blinder.

Shildon kept pushing forward and it finally paid off on 53 minutes when a Ben Wood cross bounced out to Mark Doninger who fired in the loose ball.

It was one-way-traffic with Roofers keeper making another good save from Micky Rae. In a 10 minute period Shildon had 8 chances to take the lead.

On 66 minutes, in an isolated Roofers attack, No 9 Malcolm Morien fired over from 6 yards out, their only effort in the whole of the 2nd half.

The Railwaymen took a deserved lead on 71 minutes when a cross from the left by Lee Chapman was put into his own net by keeper Andrew Hunter.

Before the end both Micky Rae and Paul Connor could have increased Shildon’s lead.

After the match manager Gary Forrest said “Although it was a bumpy playing surface, we still dominated the play. Although we went behind, we kept plugging away, just like we did against Newton Aycliffe last week, and we were worthy winners. Their keeper pulled several great saves to keep the score respectable. We still should have won by a far greater margin”.