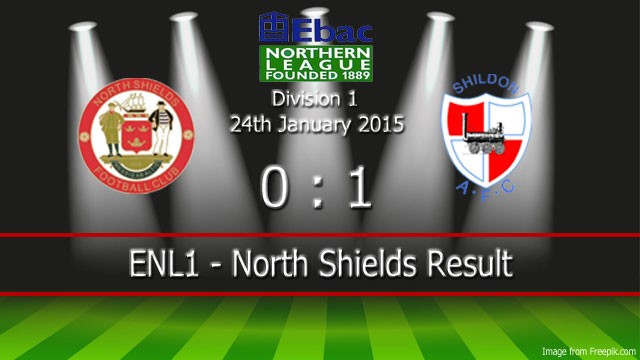 Shildon closed the gap on the league leaders with a excellent 1-0 win at North Shields. The only goal of the game can a quarter of an hour into the second half when Billy Greulich-Smith headed in from a Mark Hudson corner.

In front of a large crowd of 513, which included supermac Malcolm Macdonald, the Railwaymen started the stronger with both Ben Wood and Billy Greulich-Smith just missing the target.

On 23 minutes Paul Connor was through but was pulled back by the last man John Parker, who was yellow carded.

Minutes later Connor’s shot was cleared off the line by Parker.

At the other end, Darren Craddock was lucky not to receive a yellow card for blocking off Gareth Bainbridge.

After Shildon’s Kyle Hayes made a great stop on 56 minutes with his feet from Dean Holmes, Shildon scored the only goal of the game on the hour when a left wing corner from Mark Hudson was headed in by Billy Greulich-Smith.

Shields pressed for the equaliser with both Dean Holmes and John Parker firing wide, before Gareth Bainbridge’s shot was punched away by keeper Kyle Hayes.

In a game of few real scoring chances, there was little to choose between the two sides.

After the match manager Gary Forrest said “I thought we put in a hard working team performance. We kept our shape, worked hard and were solid throughout. Coming here and winning is a good result for us, as Shields had only been beaten once at home in the league before today’s game”.

Man Of The Match