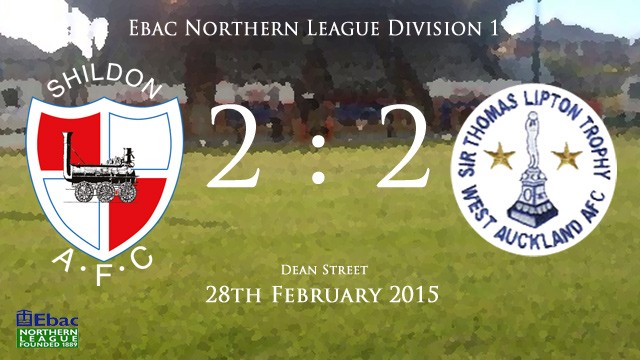 Shildon AFC are still 3rd in the league after an enthralling evenly matched  2 – 2 home draw against top of the league side West Auckland Town on Saturday 28th February 2015.

In front of a big crowd, Shildon nearly scored in the 1st minute when Jamie Harwood found Lee Scroggins but his shot was well blocked with his body by keeper Dan Lowson.

West scored a minute later with their first attack of the game when Lewis Galpin found ex Shildon forward Craig Ruddy, who looked suspiciously off side, for him to put the ball past keeper Kyle Hayes.

Shildon came slowly into the game  and were level on 24 minutes when Lee Scroggins found Paul Connor whose cool right footer beat keeper Lowson. Connor had the ball in the net again, but the goal was ruled off side by the assistant referee.

On 33 minutes West’s Craig Ruddy’s shot was deflected wide for a corner, then Daryll Hall headed just over the bar. Shortly after, Shildon’s keeper Kyle Hayes pulled off two great saves, the first from Alex Francis and then from Mattie Moffat, before the ball was eventually cleared off the line.

Early in the 2nd half it was end to end stuff but not many clear cut chances, with Mattie Moffat firing over the bar just before the hour.

Shildon went behind for the 2nd time on 71 minutes when Micky Tait fired into the area for top notch poacher Mattie Moffat to poke the ball home.

The lead was short lived as the Railwaymen were level minutes later when Paul Connor put in a brilliant cross from the right and Mark Doninger blasted a cracking goal into the roof of the next from close range.

Shildon were reduced to 10 men on 80 minutes when Sam Hodgson received his 2nd yellow card, and with the one man advantage West’s player/manager Steven Skinner send central defender Daryll Hall into the attack in the quest for the winner. But with just 3 minutes remaining this move nearly backfired on him as Shildon’s Mark Doninger crossed to the unmarked Adam Rundle, but he headed wide with the goal at his mercy.

A hard fought game between two evenly matched sides. In the end a draw was a fair result. After today’s results West have been knocked off the top of the league with Guisborough taking over the top spot. They have 67 points and played 33 games. West, in 2nd place are on 66 points and played 32 games, whilst Shildon are 3rd on 63 points but have only played 29 games. The league title is still wide open. 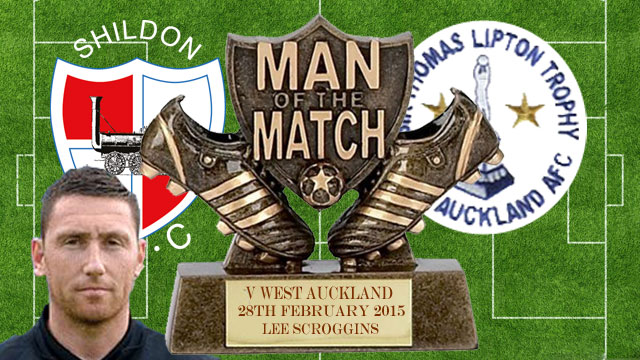