15: 00 Tonight’s game against Billingham Synthonia has been called off due to a frozen pitch 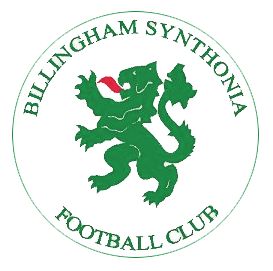 An introduction to ‘The Synners’

Billingham Synthonia F.C. is a football club based in Billingham, England. Members of the Ebac Northern League & established in 1923-24, they first contested the South Bank & District League, before joining the Teesside League. After the Second World War, Synthonia rejoined the Teesside League for a last term before joining the Northern League in 1945-46.

The name ‘Synthonia’ comes from a contraction of an agricultural product manufactured by ICI (Imperial Chemical Industries); ‘Synthetic Ammonia’ (a fertiliser). ICI was a company which was the principal employer in Billingham for many years and encouraged its employees to partake in a number of different sports. The Synners were connected to ICI until the early 1990’s when ICI sold off its Billingham operations.

The clubs first ground was on the south side of Belasis Lane, part of ICI’s original sporting complex. They moved across the road to their new Belasis Lane ground for the start of the Northern League campaign in 1945. A notable first in football occurred on this ground in 1952, when Synthonia took on an RAF Team in the first floodlit game in Northern England and the first Amateur team to play under lights. Before a crowd of 3,000, Synthonia won 8-4. They left the Belasis Lane ground to make way for a new ICI office block in 1958, moving to Central Avenue with a 2,000 capacity Cantilever Stand (the longest in the Country at the time) and a running track around the perimeter, the stadium opened on September 6th by Lord Derby. The first game against Bishop Auckland ended 2-2 with an attendance of 4,200, the club’s highest. The stadium was also used for an international athletics meeting.

Synthonia played their first Northern League match on the 25th August 1945 with a 5-4 win away at Shildon. Scorers that day were G Hawes with a hat-trick, A Rhodes & H Wilson (Wilson is the 10th all-time Synners top goal-scorer with 114 goals).

After coming third in their inaugural Northern League season & ‘Dusty’ Rhodes scoring a club record eight goals in a match at South Bank on Christmas Day 1945, Synners went on to become runner-up on three occasions; 49-50, 50-51, 51-52. In 50-51 Billingham didn’t concede a home league goal all season, keeper Harry Armstrong preserving the record in a 3-0 win over Bishop Auckland in the last game of the season. The record stands to this day.

A first trophy as Northern Leaguers came in 51-52, winning the Northern League Challenge Cup Captained by Irving Johnstone. A ‘Biffer’ Smith goal saw a 1-1 draw with Tow Law, in the replay Wally Buffham scored the only goal in a 1-0 win. Buffham went on to score 106 goals for the club. A first league title came in 56-57, Bill McQuarrie (5th in the all-time goal-scorers with 138 goals) being top scorer with 39 goals in all competitions. Billingham also boasted FA Cup runs which saw them face Football League sides in the 1st Round proper on four occasions before the 60’s; Crewe Alexandra in 48-49, Stockport County in 49-50, Scunthorpe in 51-52 and Carlisle United in 56-57, as well as Boston United 57-58.

After being runners-up in the Durham Challenge Cup in 81-82, the club enjoyed a purple patch with a host of League and Cup success, despite being relegated to Division 2 in 85-86. Promoted back to Division 1 at the first attempt in 86-87, the 2nd Division title was claimed losing just one league game. The following 87-88 season saw League Cup success over Shildon with a 2-1 win in the Final; goals from Richie Allen (2nd highest all-time goal-scorer with 195 goals) and Neil Granycome. FA Cup success also returned to the club as they reached the 1st Round for a 6th time and a ‘home’ tie against Halifax Town at Hartlepool United’s Victoria Ground. The Shaymen ran out 4-2 winners, but knew they’d been in a game. Synners’ scorers that day were Allen and Martin Hewitt. The early 80’s also saw the introduction of another 400+ appearance maker in David Parry (82-93, 417 appearances).

The 88-89 season saw the 1st Division title claimed for a second time with the firepower of striker Allen and Charlie Butler (3rd Synners all-time goal scorer with 183 goals); the start of a formidable partnership. A first Durham Challenge Cup success was also obtained with a 4-1 win over neighbours Billingham Town in the final, goals from Granycome, a Butler brace and David Shearer. A third Northern League title was secured in 89-90 and a third Northern League Cup was also claimed in a 5-2 win over Whitby Town in the Final. Further FA Cup progression also ensued with a 1st Round tie away at Lincoln City where Synners narrowly missed out with a 1-0 defeat at Sincil Bank.

More success in the Durham Challenge Cup followed in 90-91 with a 1-0 win over Eppleton CW at the Victoria Ground, Hartlepool; Tony Lynch the goal scorer. Synthonia were runner-up in the league again in 92-93. The following 93-94 season Andy Fletcher (6th Synners all-time goal scorer with 125 goals) debuted as Synners reached the Quarter-Final of the FA Trophy in a run which included wins over Conference sides Kettering Town & Macclesfield Town. Billingham exited after taking Woking to a replay with Butler scoring in the first tie away. The home game saw a 2-1 reverse, Allen the scorer. The 93-94 season also saw the introduction of Dave O’Gorman (1993-2004, 461 appearances).

Another Northern League runner-up came in 94-95. Tony Wood (9th Synners all-time goal scorer with 121 goals) debuted in the 95-96 season, the same season also saw the fourth of Synthonia’s Northern League title’s with a narrow 2 point gap ahead of Bedlington Terriers. A last game of the season 4-0 win over Dunston Federation gave Synners the points to be champions; goals coming from Paul Roberts, Mick Rowntree, O’Gorman and Fletcher. Two further runner-up spots in the league (96-97 & 97-98) came as the century came to a close.

The club’s best FA Vase run came in the 2006-07 season, reaching the semi-finals only to lose out 5-4 on penalties against AFC Totton. The away leg saw Synners gain a 2-1 advantage with goals from Shaun Hope and Colin Iley. The return leg Totton won 2-1, before a crowd of over 2,300 at Central Avenue; David Wells scoring Billingham’s goal. Wells is also a 100+ goal-scorer with 109 club goals.