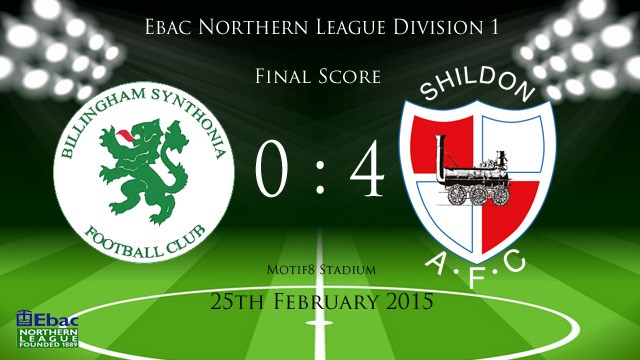 The Railwaymen are up to 3rd in the League

Shildon AFC are now 3rd in the league after an easy 4 – 0 away win at Billingham Synthonia on Wednesday 25th February 2015.

The Railwaymen are now just three points behind league leaders West Auckland Town, who have play three more games. Shildon’s next game is one of their biggest in the league this season when West Auckland visit Dean Street on Saturday 28th February, a six pointer.

Tonight’s game, just like the previous encounter with Billingham, was anything but a classic with Shildon not at their best and Synners not able to get a single shot on target for the whole 90 minutes.

Shildon took the lead after 17 minutes when a shot come cross from Darren Craddock was deemed to have crossed the line after a goalmouth scramble.

Thereafter, there wasn’t another shot from either side until just before the break when Paul Connor ran  through and fired past keeper Peter Burke.

Just before the hour Chris Emms was replaced by Mark Doninger and 10 minutes later Paul Connor cleverly dummied inside the Synners penalty area for Mark Doninger to score from 12 yards.

Four minutes later Doninger got his 2nd of the night firing into the roof of the net from 20 yards. 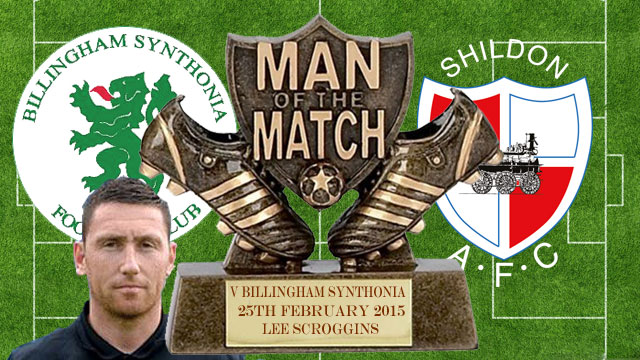