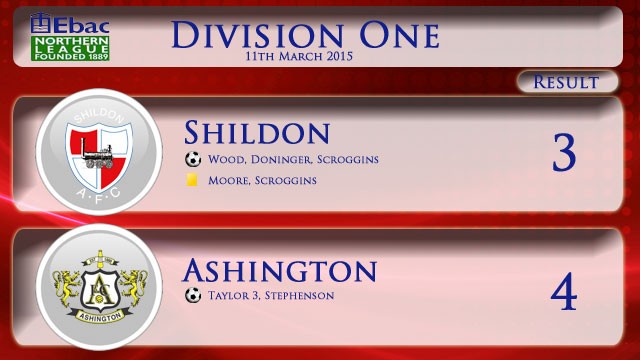 Up to the end of February 2015, Shildon AFC had only lost one league game at home all season, but March has been a bad month for the Railwaymen so far, losing twice within 4 days. First, it was 1 – 0 against Consett on Saturday 7th March, then on Wednesday 11th March they went down 4 – 3 to much improved Ashington.

Shildon got off to a dreadful start conceding a goal in the first 3 minutes when Lee Chapman lost the ball to Dylan Williamson who crossed to No 10 Glen Taylor who fired into the roof of the net.

On 16 minutes Ashinton’s Kyle Downey outpaced Jamie Harwood into the area before he was brought down by Harwood for a clear penalty, but to the amazement of everyone in the crowd the referee waived play on.

Four minutes later Ashington were in front again with a very similar move as the 1st goal with Glen Taylor firing home.

Two minutes into the 2nd half a through ball from Jamie Harwood found Mark Doninger who made it 2 – 2.

Ashington were the better side and just after the hour they went ahead for the 3rd time when Andrew Johnson’s long ball fell to the feet of star man Glen Taylor who beat Bobby Moore and fired into the roof of the net for his hat trick.

Minutes later Shildon’s defence was torn apart when a class five man move was finished off by No 8 Tony Stephenson for 4 – 2 to the visitors.

Shildon pulled a goal back on 76 minutes when Mark Hudson found Paul Connor who fired into the bottom corner for 4 – 3.

Shildon pressed for the equaliser but were unable to get another shot on target.

Shildon were 2nd best tonight with their defence all over the place.  Ashington were worthy winners. Losing tonight was another set back to Shildon league challenge title. The championship is now even more wide open with any one of 5 teams capable of taking the top spot. 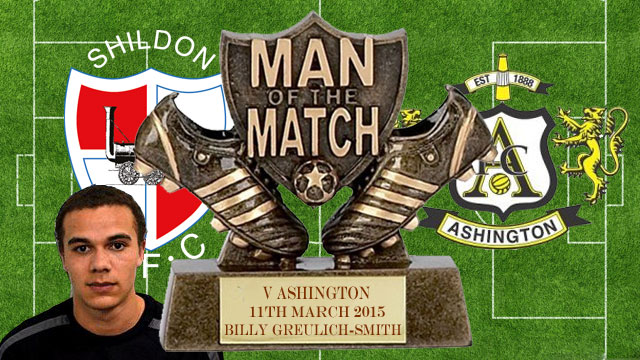