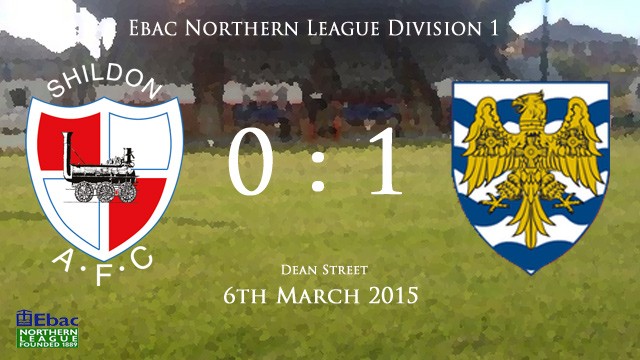 Shildon AFC challenge for the league title took a set back at home on Saturday 7th March 2015 when they were surprising beaten 1- 0 by Consett, who are now managed  by Colin Myers, who took control last month from Kenny Lindoe, both ex Shildon managers.

In blustery conditions, Consett kicked with the wind and early on No 9 Jack Walker beat three Shildon defenders but fired wide.

On 23 minutes a great shot from Matthew Slocombe produced an equally great one handed save from Shildon’s keeper Kyle Hayes.

For Shildon Billy Greulich-Smith headed over and Ben Wood fired straight at the keeper.

Before the break, on 38 minutes Shildon’s Darren Richardson was carried off the field with a bad leg injury.

The best chance of the game so far fell to Consett’s Michael Mackay on 51 minutes when he was through but somehow missed the goal.

Minutes later Consett’s keeper Chris Elliott dropped the ball from a corner for Billy Greulich-Smith’s shot to be cleared off the line by a defender.

Shildon were on top with Jamie Harwood firing over the bar from 6 yards and Bobby Moore only 5 yards out trying to place the ball instead off blasting it in.

On 67 minutes Adam Rundle crossed to Ben Wood whose header hit the post and the rebound was put away by Paul Connor, but he was judged to be off side.

With 6 minutes remaining Consett score the only goal of the game when a right wing corner was palmed out by Shildon’s keeper Kyle Hayes to No 11 Joshua Gray who cracked the ball into the right corner of the net.

Shildon gave the ball away far too easily throughout the game today and were not at their best. The manager said it was a tired team performance. In the end things didn’t work out too badly on the day as all the other possible title contenders dropped points. The league is still wide open with possibly 6 teams still capable of winning the championship. Shildon still have 12 games to play. On Wednesday 11th March they are at home to Ashington and then on Saturday 14th March local rivals Bishop Auckland are at Dean Street. 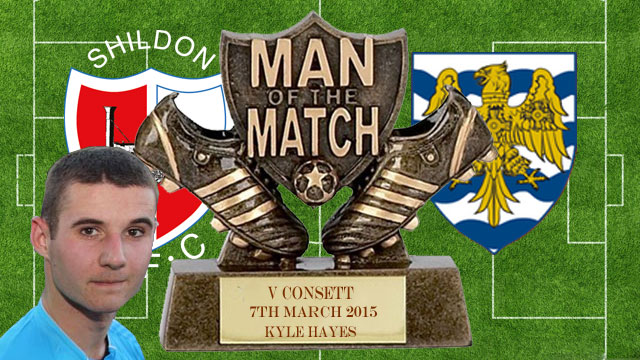