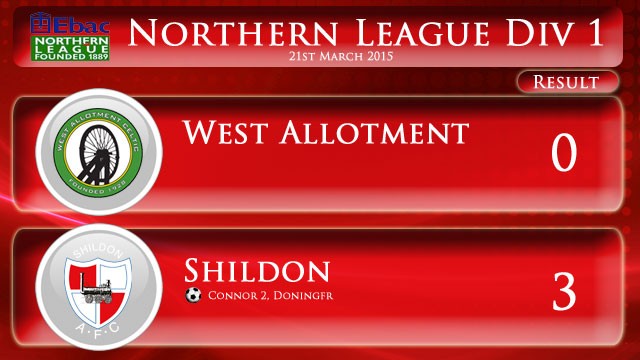 Shildon AFC who were 5th in the league before today’s game, travelled to 5th bottom club West Allotment Celtic on Saturday 21st March 2015 and came away with a comfortable 3 – 0 victory. Shildon are now 4th in the league with games in hand on the teams above them.

Next Wednesday 25th March todays fixture is reversed and the teams play each other again in the league at Dean Street.

After Celtic’s Sean Reid’s overhead kick went into the side netting early on, Shildon took control, scoring on 10 minutes when a Mark Doninger smart cross from the right found Paul Connor whose slick back heel beat keeper Dan Mullen.

It was all Shildon with the keeper at full stretch to keep out a Mark Hudson lob and then stopping a left foot drive from Paul Connor.

Just before the break a through ball from Mark Hudson found Mark Doninger who fired low into the bottom corner for 2 – 0 to the visitors.

Early in the 2nd half the Railwaymen went 3 – 0 up when a Mark Doninger cross was blasted home by Paul Connor.

A minute later Celtic’s Liam Hudson beat two Shildon defenders and was through only for Kyle Hayes to pull off a fine save with his feet.

On the hour a Mark Doninger header was pushed away for a corner then Lee Scroggins fired over.

Although Shildon controlled the play for the remainder of the half they were not able to capitalise on their superiority and didn’t add to their goal tally.

Subs:  Ellison for Rae 40, Chapman for Greulich-Smith 68, Atkin for Connor 79

As the season draws to a close, the league title is still wide open, with 6 teams still in contention. 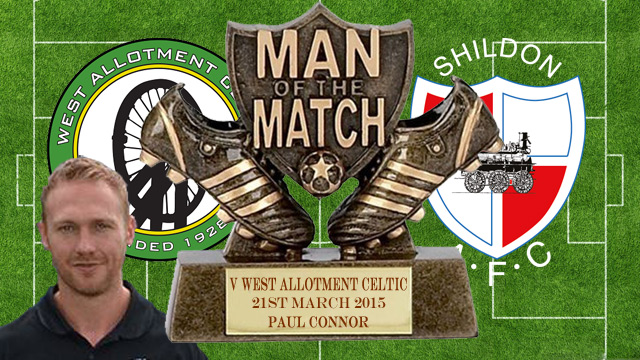