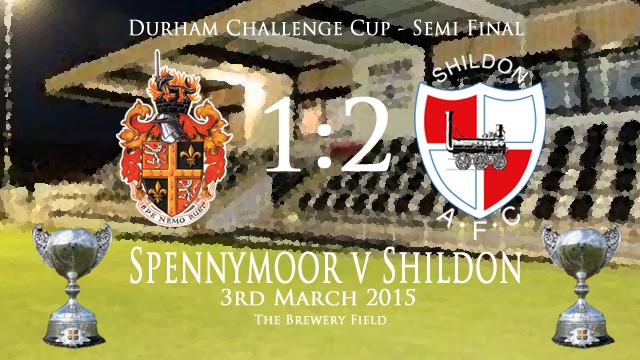 Shildon AFC reached the final of the Durham Challenge Cup for the 2nd year running with a 2 – 1  away win at Spennymoor Town on Tuesday 3rd March 2015.

Tonight’s game was a re-run of last season’s final which the Railwaymen won by the same 2 – 1 score line at Billingham Synthonia’s ground on Good Friday.

Both side have made light work of reaching this stage of the competition as neither side had conceded a goal, with Spennymoor able to play every round at home at the Brewery Field.

Shildon stunned Moors with an early goal on just 7 minutes when Mark Doninger picked up the ball unchallenged and fired home a low right foot shot from 20 yards.

On 22 minutes Paul Connor was clean through for the second time with Moors advancing keeper Luke Coddington bringing him down for a clear penalty which Lee Scroggins tucked away for 2 – 0 to the visitors.

Moors looked far more threatening in the 2nd half and on 53 minutes they pulled a goal back in a goalmouth scramble with Liam Henderson, Michael Roberts and Anthony Peacock all having shots blocked before Peacock forced the ball home from 6 yards.

Despite all the home side’s pressure they didn’t seriously trouble the Shildon defence apart from a John McReady shot on 62 minutes and in the final minute the same player McReady forced Shildon keeper to pull off a one handed save.

Subs:  Richardson for Brackstone 61, Rae for Wood 67, Ellison for Doninger 79.

After the match manager Gary Forrest said “We dug in and defended well as a team. I thought the two centre halves were outstanding tonight”. 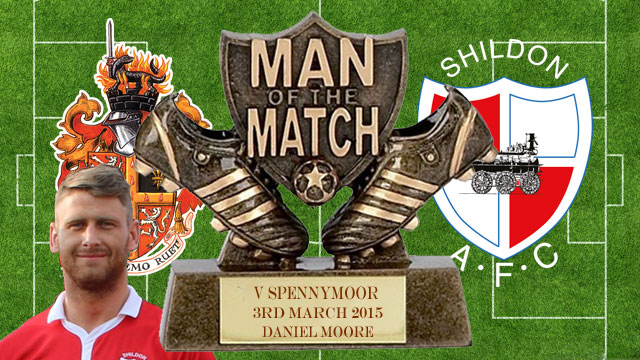