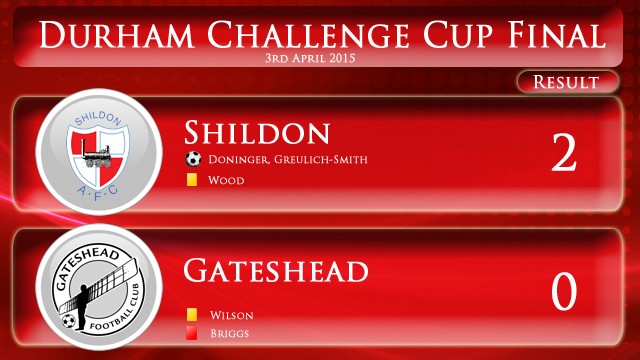 Shildon AFC retained the Durham Challenge Cup after a comfortable 2 – 0 win in the final against Gateshead FC, played in front of a crowd of 618 at the Hetton Centre on Friday 3rd April 2015.

The Railwaymen have now won the competition two years running, after waiting 42 years to win it last year.

Shildon took a  firm hold early on taking the lead on 11 minutes when Ben Wood burst through and squared the ball to Mark Doninger for him to sidefoot past keeper Alex Baird.

The Railwaymen’s defence were comfortably dealing with Gateshead’s isolated attacks.

A right wing cross from Ben Wood just failed to find the head of Billy Greulich-Smith, and just before the break a Wood left foot strike was punched out by the keeper.

On 50 minutes it was 2 – 0 to the Railwaymen when a loose pass from Gateshead’s Dillon Morse was picked up by Ben Wood whose precise pass found Billy Greulich-Smith who hammered low into the net.

On 55 minutes Gateshead’s first real opportunity fell to No 10 Jake Orrell in the 6 yard box, but Kyle Hayes pulled off a great save. Minutes later, the same player Jake Orrell beat the off side trap and was through, but once again the Shildon keeper made a tremendous stop with his feet, injuring himself in the process.

On the hour Bobby Moore missed a good opportunity to increase the lead, before Mark Doninger’s long range strike hit the post.

On 71 minutes Gateshead were down to 10 men when No 4 Dean Briggs received his 2nd yellow card.

For Shildon both Jack Taylor and Billy Greulich-Smith fired wide, and at the other end Gateshead’s Tom Marshall’s great point blank header from 10 yards brought an equally great save from Kyle Hayes.

Subs:  Craddock for Scroggins 46, Ellison for Brackstone 46, Rundle for Taylor 79.

After the match manager Gary Forrest said “This was a good team performance. We had some good chances and maybe could have scored a few more, nevertheless we got back to what we do best, that is pass the ball about. It was a comfortable win”. 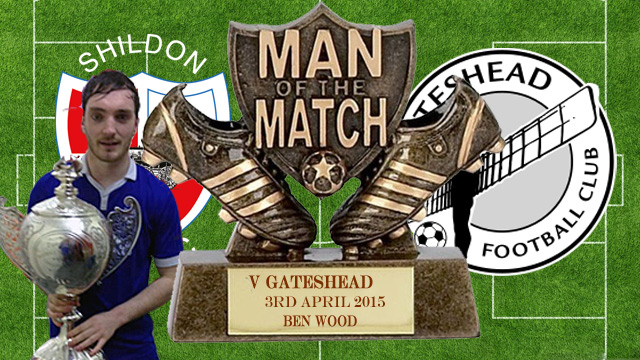