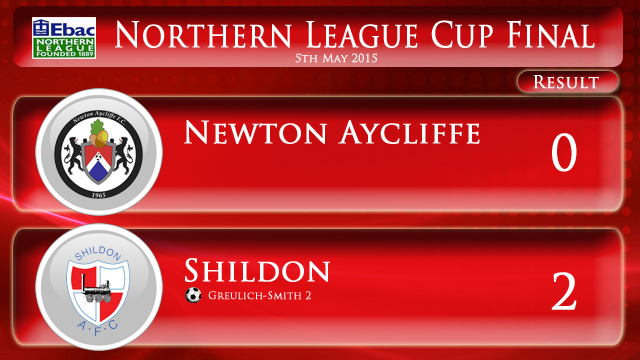 The match had been in danger of postponement after poor weather overnight flooded the Heritage Park pitch, but sterling work by the Bishop Auckland ground staff ensured the game got the go ahead.

The final was, however, tinged with sadness as the Shildon players entered the field wearing black armbands in tribute to top goalscorer, Paul Connor’s father, who tragically passed away earlier in the day. Our heartfelt condolences go out to Paul and all his family at this sad time for them.

The first half, while competitive, was mainly uneventful, with the best chance falling to Shildon captain Mark Hudson, but he skewed his shot wide from 12 yards.

The Railwaymen dominated possession throughout with Newton Aycliffe playing a counter attacking game. It was therefore vital for Shildon to score the opening goal and with just six minutes of the second half played, their dominance finally payed off.

Shildon worked the ball wide, as they had throughout the game, this time to Chris Emms who twisted his defender inside and out before sending over a cross for Greulich-Smith to power high into the roof of the net.

The goal forced Newton Aycliffe to play a more open game, and they almost levelled immediately but for an excellent save from Lewis Graham. However, it also allowed Shildon more space in which to work and just after the hour, they doubled their lead.

A Shildon corner was headed away for a throw on the opposite side of the pitch. The ball broke to Harwood whose cross was only half cleared. The resulting pass found Billy who curled an unstoppable shot around a defender for his second of the game to double Shildon’s lead.

It was the tall striker’s fifth goal in three cup final appearances over the past two seasons and ensured the Railwaymen would finish their 125th anniversary season on a high after the final day disappointment in the league.

So Shildon end a tremendously successful season as Double domestic cup winners after an extended FA Cup run and finishing runners up in the league.

The side will now open next season with a Cleator Cup appearance against Marske United and a chance to add further silverware to a cramped clubhouse bar!

Congratulations go to Gary Forrest and his management team as well as the players, the committee and every volunteer at the club for bringing sustained success to the club over the course of the season. 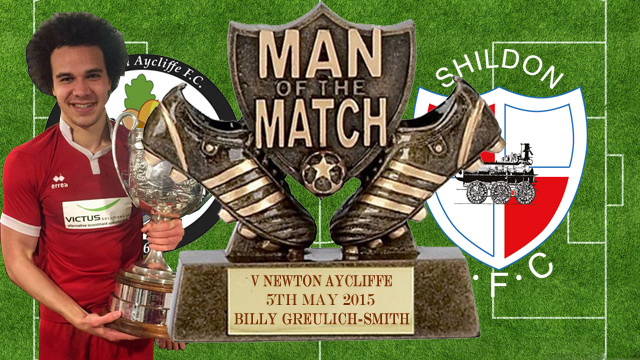