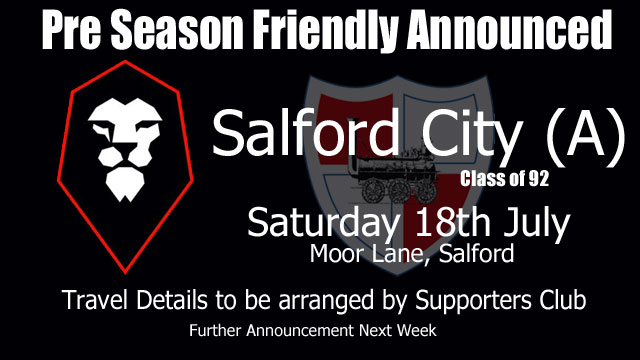 A pre-Season friendly has been arranged for Saturday 18th July against Salford City.

The Supporters club will be organising transport to the game, further announcement will be made next week

The club was formed in 1940 as Salford Central and progressed steadily through local leagues until, in 1963, when it stepped up to the Manchester League and changed its name to Salford Amateurs. Nicknamed “The Ammies” the club became a real force in the 1970s winning the Lancashire Amateur Cup in 1973, 1975 and 1977. All the Manchester County Cups and the League title came the club’s way and in one season of note the club won seven trophies. The ultimate prize – Champion of Champions – was secured in 1977. In 1979, after a decade of success, the club took its first major step towards securing its status in non-league football.

The players and committee took on the task of restoring the present Moor Lane ground. The pitch was in poor condition, the main stand roofless and derelict. Working all hours the challenge was met head on and Moor Lane was passed as acceptable for entry to the Cheshire League in 1980. When the North West Counties League was formed in 1982 with the amalgamation of the Lancashire Combination and the Cheshire League, the foresight of upgrading the ground bore fruit and Salford seized the opportunity of joining football’s non-league pyramid. The transition has not always been easy but with the reorganisation into two divisions the club eventually took their place in Division One.

Salford appeared in the Manchester Premier Cup Final at Old Trafford in 1989 and the same season saw floodlights installed at Moor Lane and the dropping of the Amateurs tag to become Salford City. In 1990 the club celebrated its 50th year by entering the FA Cup for the first time and received national exposure on BBC Television’s Grandstand’s “Road to Wembley” feature. Relegation followed the same season, however. With League restructuring in 1992 the club regained its place in Division One and with ex-Manchester United starlet Billy Garton in charge finished ninth, the club’s highest ever league position. The following years have seen improvement on this and under Andy Brown they finished third (on goal difference) missing out on promotion only in the last few games as well as again reaching the final of the Premier Cup. The last few seasons, under manager Gary Fellows, saw the club establish itself as one of the dominant sides in the North West Counties League having won the League Challenge Cup in 2006 and just missing out on promotion in 2007 with virtually an all local squad.

The 2007–08 season proved the most successful in Salford City’s history, as they finished in second place in Division One (now the Premier Division) of the North West Counties League, enough to clinch promotion to Division One North of the Northern Premier League, the eighth level of the English football league system.

Competing in the Northern Premier League Division One North for the first time, the team suffered a difficult start to the 2008-09 season picking up only one point from the first 7 games. Despite leading the team to promotion during the previous season, Gary Fellows was relieved of his managerial duties in October 2008[1] and was replaced by formerBridlington Town and Stockport Sports boss Ashley Berry.[2] After only two months, with results still not improving, Berry left the club, and former Flixton boss Paul Wright was appointed manager.[3] Unfortunately due to a pre-existing suspension from the Football Association, Wright was unable to start work until March, so his assistant manager, Neil Hall, deputised as manager for the first two months of 2009.[4] By the time Wright took up his position, the club were languishing at the bottom of the league, having achieved one win and a total of eight points from their first twenty-six games, leaving them fifteen points adrift from safety. An unlikely 5-3 away win at Lancaster City prompted a change in fortune, and with the new management team settling into their roles, the team proceeded on an astonishing run of results, garnering nine wins and a draw from their last fourteen games and finally clinching survival by two points with a 5–2 win away at Garforth Town on the last day of the season.[5]

The 2009-10 season saw strong performances in both the FA Cup and FA Trophy, but the team continued to struggle in the league. In February 2010, having lost four consecutive home matches, the club parted company with Paul Wright.[6] Rather than appoint a permanent successor, chairman Darren Quick took the unusual step of taking on the role of caretaker manager himself for the remainder of the season. Under Quick, the team enjoyed a strong finish to the season, amassing 36 points from the remaining games and finishing the league in 11th place (the highest league position in the club’s history). Despite the previous season’s heroics, the team again struggled at the start of the2010-11 season, and Darren Quick decided to end his tenure as caretaker manager, replacing himself with Rhodri Giggs who would act as player-manager alongside experienced coach Danny Jones. Results improved under Giggs with team finishing the season in 12th position. The club began well in 2011-12 with hopes of a playoff push, however a poor run of form at the start of 2012, combined with the frequent departure of the club’s top players, resulted in a mid-table finish. After the final home game of the season, Giggs announced he was resigning from the post with immediate effect.

In May 2012, the club appointed ex-professional Darren Sheridan as the new manager.[7] The 2012-13 season started well in the league, and the club also enjoyed a local derby in the preliminary round of the FA Cup against FC United of Manchester.[8] Over 1300 fans were in attendance at Moor Lane to watch the Ammies narrowly lose in a five-goal thriller. Sheridan’s tenure at the club lasted only 8 months though, and he resigned from the club in January 2013 after a review of the club’s budget.[9] The club appointed Andy Heald as caretaker manager,[10] before announcing his appointment on a full time basis a month later.[11] Under Heald’s leadership, Salford finished a disappointing sixteenth place in the Premier League Division North, but enjoyed a good cup run by reaching the final of the Manchester Premier Cup where they faced Mossley at Edgeley Park. Despite a rousing late comeback to level the score at 2-2, Mossley eventually triumphed 4-2 in the resulting penalty shoot-out.[12] At the end of the season, Heald and his assistant Chris Thompson left the club by mutual consent due to business and family commitments.[13]

Ahead of the 2013-14 campaign, the club appointed Barry Massay and Phil Power as joint managers[14] and Salford based businesswoman Karen Baird took over as chairman from the long-serving Quick.[15] The new management team got off to a strong start and were unbeaten after the first six games of the season, however form began to dip and in October 2013 the decision was made to reshuffle the management team with Power assuming sole managerial responsibility and Massay dropping down to an assistant managerial role, before subsequently leaving the club completely month later.[16] In March 2014, news broke of the proposed takeover of the club by Ryan Giggs, Gary Neville, Phil Neville, Paul Scholes and Nicky Butt subject to Football Association and Northern Premier League approval, with the deal expected to be completed by the summer.[17] The remainder of the 2013-14 season saw Power lead Salford to a respectable 12th position finish in the Premier League Division North.

With the proposed takeover of the club completed, the new ownership team were present at pre-season training in July 2014, at which Giggs suggested the consortium had ambitious aims for the non-league club, with a target of Championship level football within 15 years.[18] It was confirmed that Karen Baird would remain the club’s chairman andPhil Power would continue as manager. Prior to the start of the 2014-15 season, the club announced a showcase match against a ‘Class Of 92 XI’ featuring all five of the new owners[19] which Salford City went on to win 5-1.[20] The 2014-15 season started well with Salford unbeaten in the first 13 games, and further good news came in September 2014 as the ownership team announced that they had agreed to sell a 50% stake in the club to Singapore based billionaire Peter Lim, the current owner of Valencia CF.[21][22]Despite the promising start, a dip in form during December resulted in only 4 wins from the following 11 matches which saw the team fall behind Darlington 1883 at the top of the league. As a result, Power was sacked in January 2015 after 18 months in the role.[23] Owners Paul Scholes and Phil Neville acted as caretaker managers for the subsequent match against Kendal Town.[24] before announcing the arrival of the new managerial team of Anthony Johnson and Bernard Morley.[25] Johnson and Morley had led Ramsbottom United to promotion from the Northern Premier League Division One North during the previous season. The new managerial team went on to win 15 of the remaining 17 matches of the season, a feat which saw them regain their place at the top of the table. With Darlington 1883 failing to win their penultimate match of the season, Salford were crowned champions, guaranteeing promotion to the Northern Premier League Premier Division.[26] The championship was celebrated with Salford recording their ninth consecutive win in a 5-0 victory over Ossett Town in front of a crowd of over 1100.