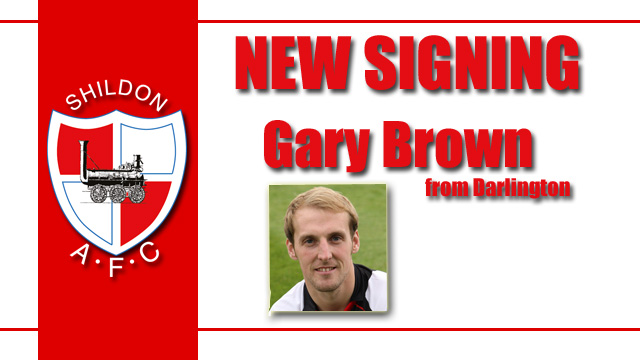 Shildon can confirm that Gary Brown has signed from Darlington 1883.

Darlington’s club captain Brown was one of the many players signed when a new squad was assembled in the summer of 2012. Brown has played for numerous Northern League clubs, joining the Quakers from nearby Durham City, as well as having a great run in the FA Cup with Blyth Spartans alongside team mate Mark Bell. A defender, who wears his heart on his sleeve, Brown has played at centre-back, right-back and in midfield over the past three seasons.  He has been captain of the club since he joined and is a player who has built a great rapport with the fans. He was an ever present in the title winning season, which led to him lifting the trophy in May 2013 at Heritage Park. During the 2013/14 campaign Brown struggled at times with injury, but returned to the side at right-back, where he has remained this campaign. Aside from his defending, he has scored multiple goals for the club and has proved to be a player who is prepared to put everything on the line for the side.