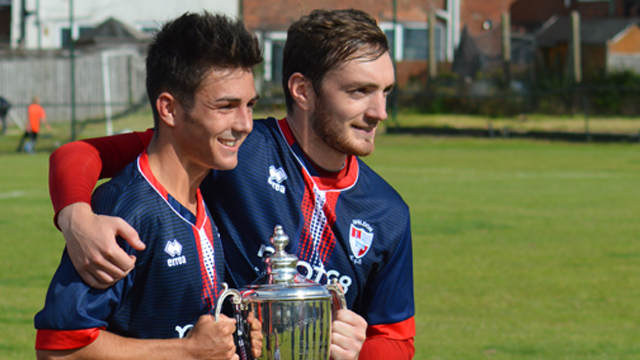 Shildon AFC kicked off their season in earnest on Saturday 1st August 2015 when they travelled to Marske Utd. to play for the Ebac Northern League Cleator Cup Trophy. The Railwaymen came away 2 – 0 comfortable winners, controlling the play for most of the game.

Shildon had keeper Jake Johnson and No 3 Matthew Robson making their debuts, with recent signings Dan Groves, Lewis Wing and Kyle Fryatt all in the starting line-up.

In the 3rd minute Marske’s No 8 Craig Gott’s good shot produced an equally good save from Shildon keeper Jake Johnson.

Shortly after, slack defending from Marske let Ben Wood through but he fired wide.

It was all Shildon with Kyle Fryatt tearing down the right, too fast for the defence, but his shot went across the face of the goal. Ben Wood shot wide and Kyle Fryatt fired over before Marske keeper Robert Dean made a close range block from a Bobby Moore header.

Just before the break Shildon’s constant pressure finally paid off when a cross from the right found Billy Greulich-Smith who fired in from close range.

Shildon kept up the pressure in the 2nd half with three early successive corners. Two long range efforts from Lewis Wing sailed just over, before Billy Greulich-Smith failed to find contact with his head, with the goal at his mercy.

The Railwaymen deservedly were 2 – 0 up on 79 minutes when a cross from the right resulted in a goalmouth scrabble and captain Mark Hudson headed against the bar and over the line.

Marske were resigned to kick and rush tack ticks and never got going in the second half.

After the match Assistant Manager Stuart Niven said “This was a comfortable win with Marske never really troubling us at all. We should have won by more than two clear goals”.