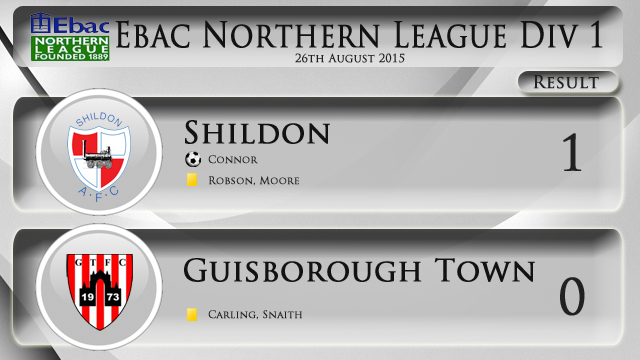 Shildon’s good start to the season continued on Wednesday 26th August 2015 when they beat Guisborough Town at Dean Street. The win takes the Railwaymen to top of the league, having played 4 and won 4, scoring 16 goals without conceding any.

Shildon went close a few times in the first half. On 9 minutes a Bobby Moore curling left foot shot hit the bar and Guisborough keeper captain Nicky Liversedge saved the follow up from Paul Connor.

On 24 minutes Paul Connor broke through and his great shot was pushed onto the bar by the keeper.

Shildon looked the most threatening, with Guisborough giving the ball away too easily.

Early in the 2nd half Town’s Danny Earl nearly scored but his effort was cleared off the line by Shildon’s star man Gary Brown.

On 52 minutes last man Paul Connor was through but was brought down by Leon Carling just outside the area. Amazingly, he was only given a yellow card.

The stalemate was broken just after the hour when Matty Robson crossed to Paul Connor who fired home a left foot shot into the bottom right corner.

After the goal Town piled on the pressure but never really threatened Shildon’s defence. They had shots but not on target.

Subs:  Greulich-Smith for Wing 76, Hudson for Doninger 80, Fryatt for Connor 88.

After the match manager Gary Forrest said “Our concentration tonight was excellent. It was a superb team performance. We could have been two or three up by half time. We were in better shape throughout the game”.