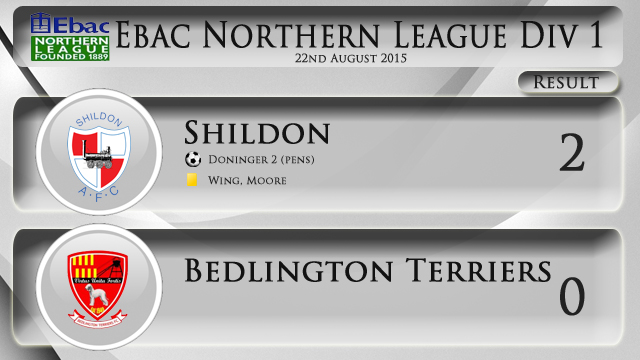 After losing midweek in the F.A. Cup against Bishop Auckland, the Railwaymen continued their winning ways in the league with a 2 – 0 home victory against Bedlington Terriers on Saturday 22nd August 2015. Shildon are now 2nd in the league with a game in hand. They have played 3 won 3 with 15 goals scored and none conceded.

As expected Shildon piled on the pressure from the kick off and should have been ahead after just 5 minutes but Micky Rae’s shot from 4 yards out was weak.

Kyle Fryatt was causing problems down the right with his pace and on 26 minutes Shildon were awarded a penalty when he was brought down in the box by Marc Dummett. Ex Bedlington player Mark Doninger scored from the spot kick sending the keeper the wrong way.

Five minutes later Terriers were awarded a penalty when Matty Robson brought down Dean Briggs, but Briggs spot kick rattled against the bar.

Terriers were pressing for the equaliser, putting Shildon under pressure, with a Liam Hudson shot cleared off the line by Carl Jones.

Just before the break Shildon’s Kyle Fryatt side footed past the keeper, but the ball hit the post.

Just after the hour Shildon were awarded their 2nd penalty when the same player Marc Dummett brought down Kyle Fryatt again, for Mark Doninger to score his 2nd goal of the game from the spot kick. Mark has now scored 7 league goals in just 3 games.

Although Shildon dominated the play they were trying to walk the ball into the net instead of having a shot.

Near the end Paul Connor had a one on one with keeper Frazer Nairn saving well, and Nairn also blocked a shot with his feet from man of the match Lewis Wing.

Subs:  Brackstone for Greulich-Smith 46, Davis for Doninger 63, Connor for Rae 68.

After the match manager Gary Forrest said “It was a steady performance today, we got better as the game went on, as we were sloppy in the 1st half. A wins a win, and we move on to the next game on Wednesday, at home to Guisborough Town”.