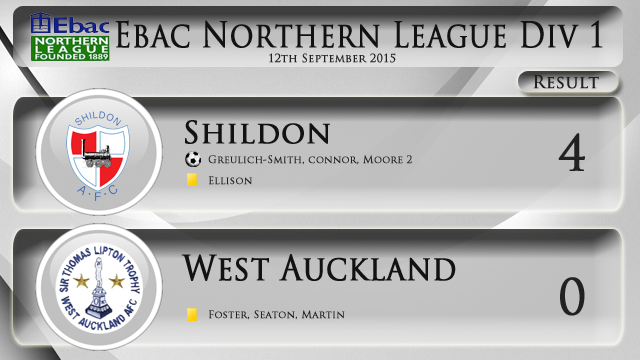 Top of the league Shildon AFC played bottom club West Auckland Town at Dean Street on Saturday 12th September 2015 with the class difference  evident from the kick off , the Railwaymen winning easily 4 – 0, with all the goals coming in the first half.

On 19 minutes a Matty Robson cross was headed in by Billy Greulich-Smith. Constant pressure paid off just before the half hour when Ben Wood crossed for Paul Connor to head past keeper David Knight. Minutes later Matty Robson squared the ball to Daniel Moore whose right foot curler found the roof of the net. Just before the interval a corner kick was cleared out to Daniel Moore who blasted through a crowded defence for 4 – 0 and game well and truly over for West.

As in the first half it was one-way-traffic in the second, but despite having all the possession Shildon were unable to capitalise on their superiority. They missed chance after chance and should have doubled their score, with Daniel Moore, Billy Greulich-Smith, Paul Connor and Kyle Fryatt all squandering good scoring opportunities.