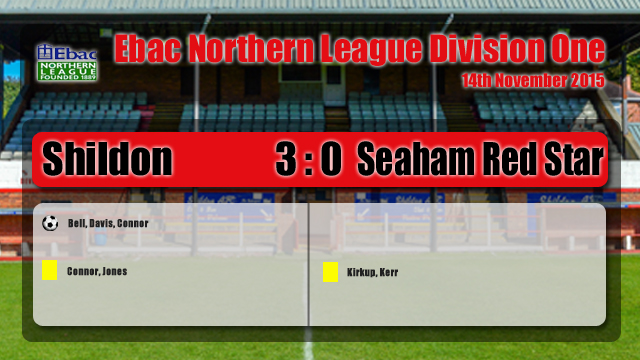 Shildon AFC keep the pressure on league leaders Morpeth Town after a comfortable 3 – 0 home win against Seaham Red Star on Saturday 14th November 2015. The Railwaymen are 5 points behind Morpeth and have played the same number of games.

Shildon scored early when a Billy Greulich-Smith shot was parried out by keeper Shaun Newbrook for Anthony Bell to fire into the bottom corner.

Seaham’s Ryan Noble hit the outside of the post before Shildon extended their lead when a long range free kick from Jonny Davis when through the whole defence into the net.

Just after the half hour Seaham’s No 5 Dan Kirkup was very fortunate to stay on the field after he viciously brought down Kyle Fryatt. Likewise, Shildon’s Paul Connor could easily have been red carded for retaliation. The ref only issued both players a yellow card.

Early in the second half Shildon were less threatening allowing Seaham more possession. No 4 Paul Gardiner was clean through but he somehow shot wide. Minutes later a great shot from Ryan Noble produced a great save from Shildon’s keeper Lewis Graham.

At the other end star man Anthony Bell saw his effort well stopped by the Seaham keeper.

Shildon sealed the win on 79 minutes when Bell crossed from the left for Paul Connor to side foot home.

Subs:  Fryatt for Greulich-Smith 16, Hodgson for Fryatt 38, Harwood for Doninger 77.

After the match manager Gary Forrest said “This was a comfortable win and we move on to the next game”.