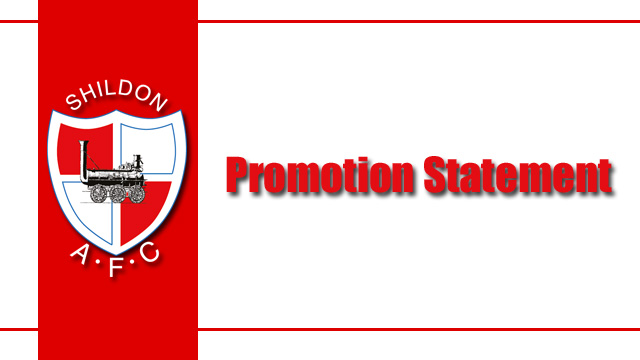 Director David Dent stated ” We are only half way through our 3 Year Growth Plan and despite some fantastic improvements both on and off the field we believe that the time is not right to make the step up through the leagues. A decision on our ground will not be made until the 21 December and whether we stay at Dean Street or leave  improvements would have to be made to support our progression to Step 4. We are also involved in some very exciting discussions around the establishment of an Academy at Shildon next season which again demands our immediate attention and which forms part of the longer term strategy for the club as does the formation of a Development squad next season which will provide a pathway for our current Under 18 squad hopefully to the first team ”

Manager Gary Forrest added ” When I came to Shildon I managed a team, I now manage a Club and our focus this and next season has to be in laying the foundations through supporting our  Under 18’s, arguably the best in the North East to progress to be our Reserves next season with the very best of them joining our first team squad. We equally  want to build on our success at first team level where I have been very open and stated that our ambition is to win the Northern League. That ambition has not diminished and before we consider promotion those on the field ambitions need to  be realised”