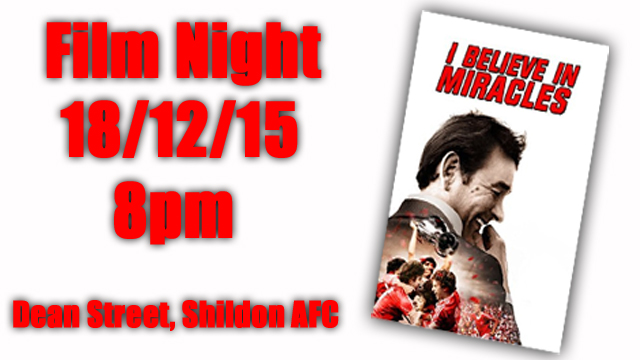 Film Night in the Clubhouse

On January 6, 1975, Nottingham Forest were thirteenth in the old Second Division, five points above the relegation places and straying dangerously close to establishing a permanent place for themselves among football’s nowhere men.

Within five years Brian Clough had turned an unfashionable and depressed club into the kings of Europe, beating everyone in their way and knocking Liverpool off their perch long before Sir Alex Ferguson and Manchester United had the same idea.

This is the story of the epic five-year journey that saw Forest complete a real football miracle and Clough brilliantly restore his reputation after his infamous 44-day spell at Leeds United. Forest won the First Division championship, two League Cups and back-to-back European Cups and they did it, incredibly, with five of the players Clough inherited at a club that was trying to avoid relegation to the third tier of English football.

I Believe In Miracles is based on exclusive interviews with virtually every member of the Forest team, it covers the greatest period in Clough’s extraordinary life and brings together the stories of the unlikely assortment of free transfers, bargain buys, rogues, misfits and exceptionally gifted footballers who came together under the most charismatic manager there has ever been.