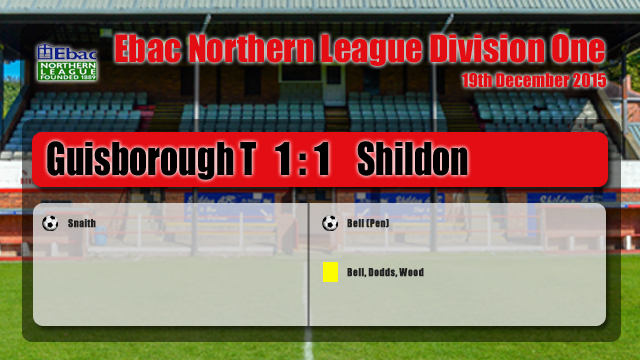 Shildon AFC missed the chance to close the gap on league leaders Morpeth Town when they were held to a 1 – 1 draw at the KGV Stadium in Guisborough on Saturday 19th December 2015.

Shildon were the better side and should have won the game comfortably but some diabolical refereeing decisions robbed the Railwaymen of all three points.

Shildon had two clear penalty claimed turned down and had a perfectly good goal disallowed after just 3 minutes when keeper Nicky Liversedge fumbled the ball over his line, but Bobby Moore was deemed to have pushed him. The video of the game shows clearly the goals should have counted.

It was all Shildon in the first have with Dan Groves making a scintillating run beating 5 defenders but his shot was saved. Then Paul Connor was through and should have scored before he was hacked down in the box, but alas, the referee said play on.

Five minutes into the 2nd half Shildon had another appeal for a penalty for a clear hand ball turned down.

After 76 minutes the home side took the lead when Danny Earl’s shot was parried out and Steve Snaith fired in the rebound.

In time added on Shildon finally got a little bit of justice when the ref. gave a soft penalty after Jonathan Helm fouled Micky Rae in the box, and Anthony Bell scored from the spot kick.

Two points lost thanks to some controversial refereeing decisions. Shildon are now one point behind Morpeth but have played two games more. The next game on Boxing Day is a 6 pointer when Shildon travel to top of the league Morpeth.