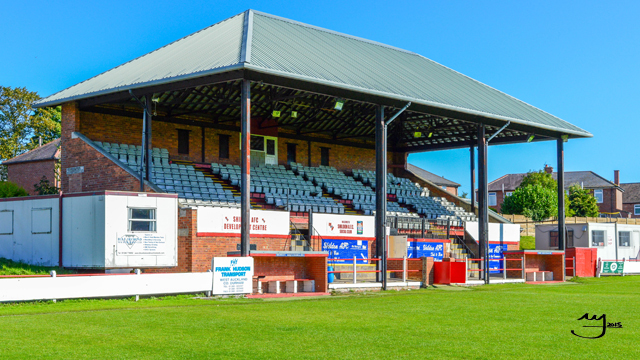 From Mike Amos “The Chairman’s Blog”

Shildon are staying at their Dean Street home, elderly but much loved. After years of speculation, and a great deal of hard work and exploration, the decision was taken at tonight’s annual shareholders’ meeting.
My own shareholding, it should be explained, is humble. It’s precisely four and with a face value, memory suggests, of 25p apiece. Sell? No chance, they could be worth 50p one day.
The club has long contemplated a move, not least because of the perceived need to grow an academy and development sides but also because the dear old “pagoda” stand has seen very much better days. That the seats and flooring are wooden also means that attracting funding for refurbishment would be difficult.
Several property developers had expressed an interest in the ground – opening up the possibility of a move to an athletics stadium on the edge of the town – but nothing acceptable has materialised.
So what now? The club will look to erect a 250-seat stand to replace the existing cover on the far side, allowing the seating areas of the old stand to be mothballed. The dressing rooms and clubhouse will be upgraded, with the hope of an academy partnership with Sunderland’s Foundation of Light.
Club director David Dent has done a huge amount of work on the whole project, The backing for his recommendations was unanimous. Off the field, at least, it was one of the most momentous nights in Shildon’s history. Those shares could be worth a fortune.

Mike’s blog can be found at http://www.northernleague.org/blog/view_latest_chairmans_blog.php