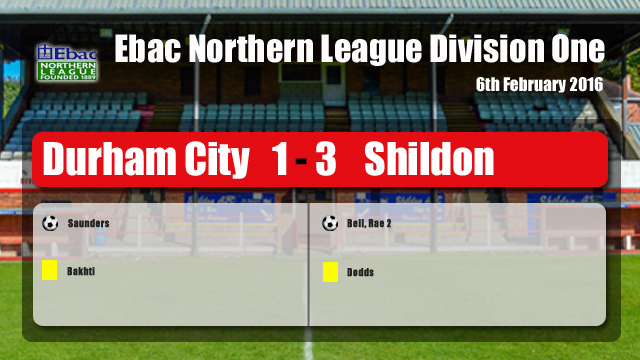 Shildon AFC stay 5 points clear of Guisborough Town at the top of the league after defeating Durham City 3 – 1 at Consett’s ground on Saturday 6th February 2016.

After a comfortable 3 – 0 win against the same team just 4 days earlier, Shildon controlled most of the game today.

After an early shot from Durham’s Harvey Saunders was punched away by keeper Kyle Hayes, Shildon scored just after the half hour when a long ball from Lewis Dodds found Anthony Bell who turned his man and fired into the far corner of the net.

Before the break Dodds fired wide and shots from Ben Wood and Lewis Wing were well saved.

Shildon doubled their lead early in the 2nd half when Anthony  Bell’s corner was headed past keeper Thomas Flynn by Micky Rae.

Just before the hour Rae was through but despite being brought down in the box by the keeper he squared to Ben Wood who fired into an empty net, but the goal was disallowed as the referee had already blown for a penalty. Up stepped Anthony Bell, but his spot kick was weak and saved by the keeper.

On the hour it was 3 – 0 and game over when Micky Rae’s powerful long range drive beat keeper Flynn.

With just 2 minutes remaining Youngster Harvey Saunders pulled a goal back for Durham. He nearly got a second with a great header which was brilliantly saved by Shildon keeper Kyle Hayes.

Shildon are clear at the top of the table but 3rd place Morpeth Town can still overtake them if they win all their games. Shildon are 11 points ahead of Morpeth who have 6 games in hand. The Railwaymen entertain 5th place title contenders Dunston UTS at Dean Street on Saturday 13th February.