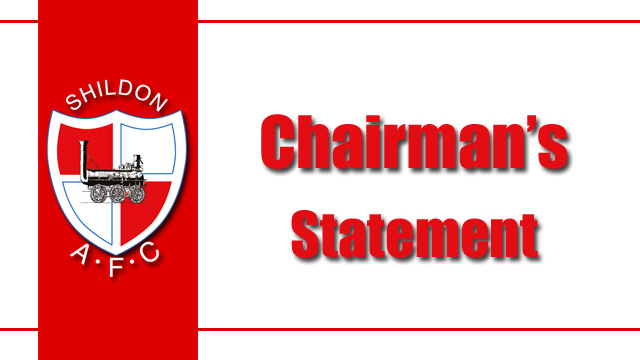 Statement From The Chairman

Shildon AFC long-standing Chairman, Brian Burn has made the decision to resign as Chairman of the club at the end of the season.

Brian stated “After a lot of consideration I have taken the decision to step down as Chairman of Shildon Football Club at the end of this current season. This decision has not been taken lightly but I feel that the time is now right to hand over the Chairmanship to Mr David Dent, a fellow Board Director who has worked alongside me for the last 5 years. Over this period we have set the foundations in place for moving the club forward on a number of different fronts and with David’s drive, vision and business acumen I have every confidence in him to allow the Club to achieve its ambitions both on and off the field.

“I have assured David and the board that I will continue to remain on the Board and will provide support to the new Chairman and the wider Board members in whatever capacity I can. I have extremely fond memories, experiencing some fantastic highs and also some heartbreak, being so close to Wembley and the League title. I still have the appetite to stay around and see Shildon enter a new era where I am sure we will be successful. I would also like to take this opportunity to thank everyone involved at all levels, during my chairmanship who have helped me turn the club around. Well done to all and I hope we all give David as much help and assistance as you all gave me”.

“It goes without saying that it will be an absolute honour to take over the Chairmanship of this great football club. It’s also been a privilege to work alongside Brian who saved this club from extinction 10 years ago. A fact that will never be forgotten. I am delighted that Brian intends to stay on as a Director where his support will be invaluable. I am also extremely pleased to announce that he has accept the position of Vice President. Brian being as modest as ever felt it was not something the club had to do. We as a board were firmly believed that it represents a fitting tribute in recognition of all of the hard work he has put into this football club”

“We have a very hard working and talented Board who are all committed to realising our vision which is to be a competitive but sustainable community focused football club which our supporters can be proud of. We have made a great start but the forging of even closer relationships with our Supporters Club, Development Centre, sponsors and partners the Foundation of Light will all be integral to helping us exceed our expectations for the future. We have some exciting plans which we will unveil in the coming months”.