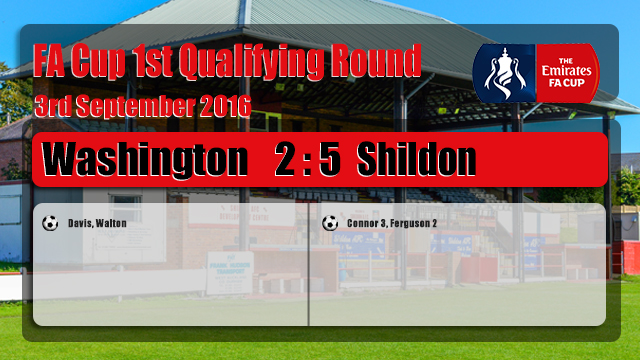 Shildon AFC strode into the 2nd Qualifying Round of the F.A. Cup after a 5 – 2 five star performance away to Washington FC on Saturday 3rd September 2016.

The Railwaymen opened the scoring on 10 minutes when a great cross from David Ferguson was stabbed home by Paul Connor.

Seven minutes later it was 2 – 0 when another great ball, this time from Ben Wood put David Ferguson through.

It was all Shildon with several corners, one after another.

In fact it took Washington 31 minutes to get their first chance of the game, but Callam Hope’s free kick was well saved by Nick Liversedge.

It was 3 – 0 and game over shortly after when David Ferguson’s glancing header easily beat keeper Dale Connor.

Shildon were stunned when Washington pulled a goal back on 42 minutes when a long through ball was missed by Shildon’s Dan Groves and Ashley Davis scored a cracking goal from way out.

Just before the interval the Railwaymen restored their three goal lead when David Ferguson put Paul Connor through and he chipped the keeper.

Just before the hour another long ball found  Washington’s No 8  Joe Walton for the home sides second goal.

Minutes later a long ball down the right put David Ferguson through on the keeper, but he squared the ball to the unmarked Paul Connor who fired into an open goal for his hat-trick and to restore Shildon’s three goal advantage again.