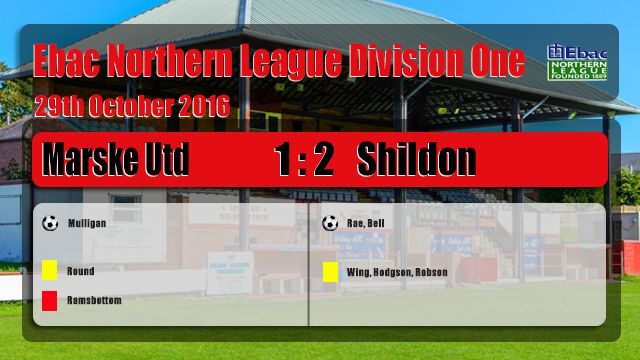 Shildon Remain 4th in the League

Shildon AFC are still 4th in the league after a 2 – 1 away victory at Marske United on Saturday 29th October 2016.

However, the score line was not a true reflection of the game as Shildon should have won by a far greater margin. In fact, Dale Mulligan’s headed goal was Marske’s one and only effort on target for the whole of the game.

Shildon were on the attack from the kick off and after just 6 minutes Micky Rae was clean through but he shot wide. Two minutes later Marske’s keeper Robert Dean’s poor clearance went straight to Micky Rae who lobbed the ball over Dean’s head only for it to hit the bar. It was third time lucky for Micky on 9 minutes when he fired passed keeper Dean.

Just before the interval a right wing corner from Curtis Round was headed in by Nathan Mulligan for Marske.

Despite Shildon creating several chances there was no more goals in the 2nd half. Billy Greulich-Smith failed to connect and Amar Purewal’s shot was weak. Paul Connor was through and somehow missed. Shortly after he was unmarked and missed again from 6 yards out.

Not the best of games. It was a one sided affair which Shildon should have won easily had they taken their chances. Shildon’s keeper Nick Liversedge didn’t have one save to make.