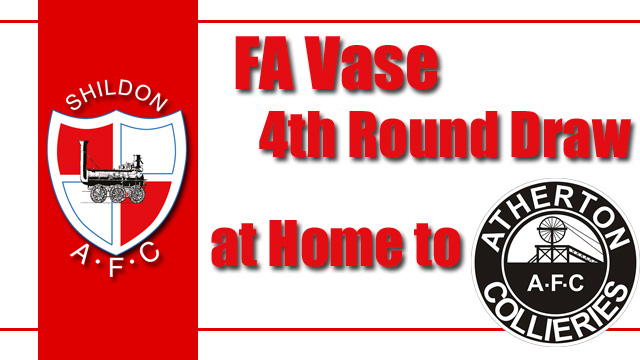 Shildon have been drawn Atherton Collieries in the 4th Round of the FA Vase. The game is due to be played on the 7th January 2017, kick off 3pm.
Atherton currently sit 4th in the NWCL Premier Division.

The last time and only time we played Atherton Collieries was away from home in the 1st Qualifying round of the FA Vase in the 1999-2000 Season. The Colls winning on the day 3-1.

Atherton Collieries Football Club was established in 1916 by miners from the six pits which were then operative within the old urban district of Atherton. Between 1919 and 1965 they were winners of the Bolton Combination League ten times. They established a noted reputation in Lancashire and by 1964-65 had won the Lancashire Junior Shield six times, a record which is still unsurpassed.

They are affectionately nicknamed ‘Colls’. They play at Alder House and the much maligned, but recently demolished, main stand was described in David Bauckham’s book Dugouts as “leaning forward as if in prayer for its continued survival”.

Steady progress off the pitch, with floodlights being erected in 1994, was matched by progress on the pitch as Colls’ final league position improved season on season. This culminated in promotion to the first division after finishing the 1995-96 season as runners-up to Vauxhall GM.

Colls suffered mixed fortunes during their tenure in the NWCFL Premier Division. Their best season came in 2006-07 when they finished in seventh place under Phil Brown. During 2005-06 and 2006-07 seasons Anthony Pilkington made 35 appearances for the club scoring 19 goals. Pilkington scored a hatrick at Gigg Lane against FC United of Manchester, resulting in a move to then football league side Stockport County. The striker then progressed, moving on to Huddersfield, Norwich City and Cardiff City claiming international caps for the Republic of Ireland.

The club were relegated at the end of the 2008/09 campaign and Steve Pilling was appointed manager in August 2009. In 2010/11 the club won their first NWCFL silverware for decades when AFC Liverpool were beaten 3-2 (aet) in the First Division Trophy Final.

Season 2011/12 saw the club finish fourth in Division one but another trophy was added to the honours board. The Bolton Hospital Cup was won for the first time in twenty five years with a penalty shootout triumph over Eagley. The Reebok final had ended 2-2. Seasons 2012/13 and 2013/14 saw the team lead the NWCFL First Division in the early stages but fall away towards the end.

Steve was a committed servant to the club and in his five seasons at the club the team finished in 6th, 5th, 4th, 4th and 5th position respectively. Michael Clegg took over the managerial reins at the commencement of the 2014/15 campaign. He had previously enjoyed stints at near neighbours Pennington and Atherton LR and with the help of strong backroom support and local players he is endeavouring to get Atherton Collieries further up the non league pyramid.