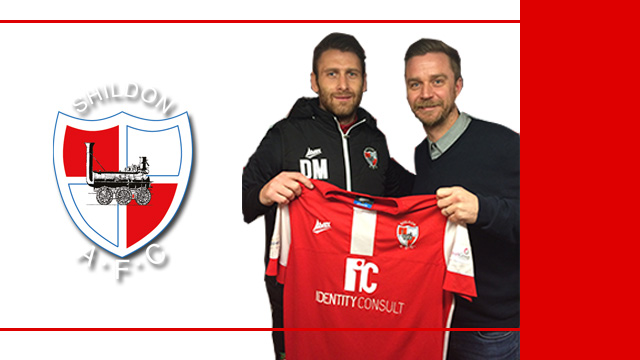 Shildon’s new manager Daniel Moore has made his first appointment by bringing former Middlesbrough and Hartlepool United player Micky Barron to the club as Assistant Manager.

Barron started his career at Middlesbrough. Despite spending four years at the club, Barron only made three appearances and found his chances of breaking into the first team limited. This forced Barron to look elsewhere and he was allowed to go on loan to Hartlepool United. Barron made his debut for Hartlepool against Carlisle United. During his loan spell Barron made 14 appearances. Middlesbrough then released Barron and he signed permanently for Hartlepool.

From 1999 to 2005, Barron has spent the majority of that term as club captain and made over 326 appearances for the club and has the eighth most total number of appearances for the club.
Barron was in the Hartlepool side that had three consecutive Football League Third Division play-off semi-final defeats before winning promotion in 2002–03 but being pipped to the league title by Rushden & Diamonds.

He led out the Hartlepool team as captain in their League One play-off final in May 2005 against Sheffield Wednesday where a late equaliser eight minutes from time denied Pools their first ever promotion to the Championship, Hartlepool went on to lose in extra-time 4–2 in front of a crowd of 59,808 at the Millennium Stadium.

To celebrate 10 seasons with the club, a series of events were held such as testimonial dinner with Bobby Robson as guest speaker. Barron could only attend the later stages of the dinner as he was involved in a reserve team match while trying to make his comeback from injury. A testimonial game, against Leeds United which Hartlepool won 2–1, was also held. During his time on the sidelines, he became a regular special guest commentator on Pool’s World, the Hartlepool United audio commentary service. Barron signed a new contract in June 2007. He retired at the end of the 2007–08 season which saw Hartlepool finish 15th in League One.

During his final playing season with Hartlepool, Micky was a player-coach for the League 1 side as the youth team coach. He kept up this role before being the club’s assistant manager to Mick Wadsworth whilst undertaking the role of reserve team coach; John Hewitson was then put in charge of Barron’s previous role of youth team coach. He was sacked by Hartlepool along with manager John Hughes in May 2013 which allowed Colin Cooper and Craig Hignett to replace to pair later on that month.

He took on first-team duties as caretaker manager on 6 December 2011, following the sacking of previous manager Mick Wadsworth. He was in charge for three games, losing the first two and then beating Oldham 1–0, but reverted to his reserve team duties when Neale Cooper was appointed manager on 28 December 2011.

Neale Cooper resigned as Hartlepool manager on 24 October 2012 with the club sitting bottom of League 1 leaving Barron in charge as caretaker manager until a new manager was appointed. He drew his first game in his second stint as caretaker manager 2–2 against Brentford courtesy of a late own goal.

At the moment, Barron works at The Hermitage Academy in Chester-Le-Street; participating in the PE Department and joining sports clubs such as hockey.