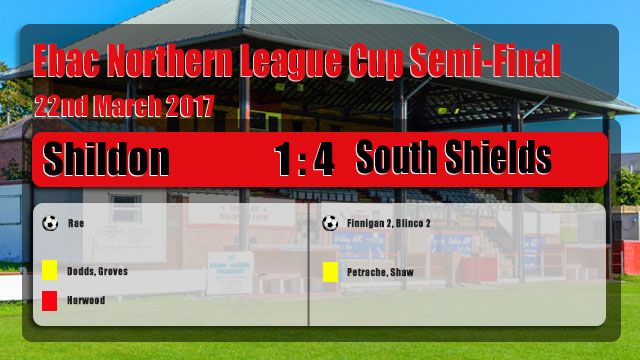 Shildon were knocked out of the League Cup, losing 4-1 to South Shields.

Micky Rae gave Shildon an early lead slotting past keeper Connell. 7 Minutes later South Shields were awarded a penalty when Jamie Harwood was harshly penalised for an alleged foul on South Shields forward Jordan Blinco,  to everyone’s amazement then Jamie was sent off leaving Shildon 78 minutes to play with 10 men.

Carl Finnigan scored the penalty to level, then 2 furthe goals for Jordan Blinco and another for Finnigan in the second half set up a tie against North Shields in the Final.