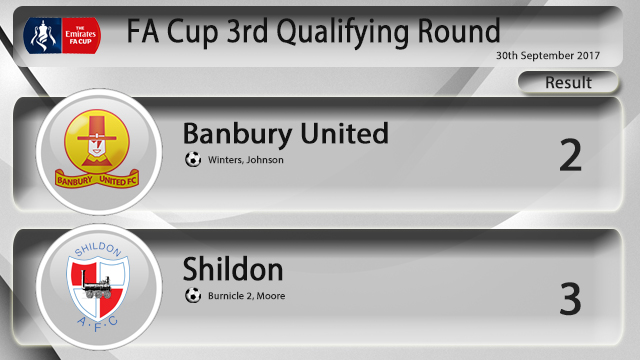 The hosts took the lead when Tom Winters fired into the top corner from the edge of the box. Adam Burnicle equalised to send the teams into halftime 1-1.

In the second half Player/Manager, Daniel Moore headed into the net and Burnicle grabbed his second to put Shildon 3-1 up.  Ricky Johnson then pulled a goal back heading in from a Tom Winters cross to make it a nervy last 10 minutes as the home side pressed, but excellent defending by Dan Groves & Dominic Curl who both cleared efforts off the line sent Shildon through.

The draw will be made live on Talksport 2 on Monday at 1pm.

Match Report from Banbury can be found here: