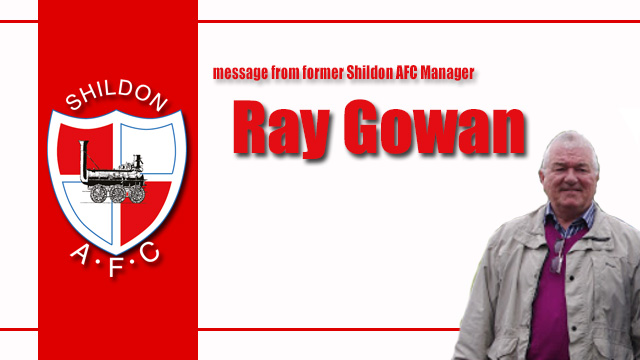 Former Shildon AFC manager Ray Gowan has emailed in and even though he will be 6,000 miles away will be glued to any form of media he can get hold of.

“I was Manager the last time Shildon reached the FA Cup First Round (it was the last time that ANY Northern League club went that far as well) and although I am 6000 miles away I will be following every kick and keeping my fingers crossed that it happens again on Saturday. It’s a tough draw against a Conference side on their ground but they have been struggling this season and will be under great pressure as favorites. We have a great chance of making an impact and I sincerely hope that the feat of some 13 years ago can be repeated. It’s a beautiful ground with a good surface which will suit our style and the whole of the Cape Town branch of the Supporters Club will be rooting for the lads. Come on The Railway Men!”

“One of my very best South African mates called Laurie Snyman who has never even been close to an airplane, let alone England, went out and bought a red and white scarf yesterday. That’s how excited we all are here.

There are two very good omens, although Guiseley have gone on a bit since then, – My Brandon United side of 1983/84 went to Nethermoor Park and won 1-0 in the FA Vase fifth round and my Spennymoor side of 1989/90 also beat them there in the first season that we were in The Northern Counties East League. Let’s make it a hat-trick!”