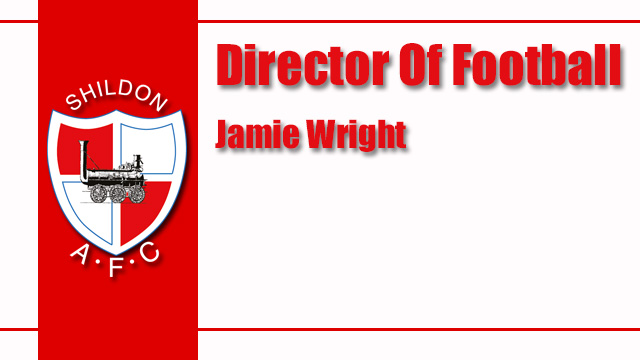 Shildon AFC have appointed Jamie Wright as its new Director of Football with immediate effect. Jamie is currently Managing Director of the Foundation of Light and is responsible for their Football Scholarship programme offering across three sites in the North East in which Shildon AFC will be their chosen partner. Jamie also is a first class coach and holds his UEFA B and FA Youth Award.

Chairman David Dent said “I have worked alongside Jamie for some time and his appointment forms an important part of our strategy for taking the Club forward. Jamie will use his extensive contacts to assist Dan Moore identify young talented footballers who have the aspiration to progress with the Club. He will also help out Andrew Finch in his new role within our Development Centre to bring some greater structure to our coaching offer and work alongside me in helping to develop a joined-up Football offer and help realise our ambitions to develop a 3G five a side pitch at Dean Street for the benefit of the Club and the wider community. Finally, I would like to place on record my thanks to Chris Hughes who helped found the Development Centre 5 years ago and who has helped identify some really exciting prospects. Without Chris, there would be no Development Centre and we would have only a 1st Team, not a Club”

Jamie Wright said “This is an exciting opportunity to further strengthen and develop the links between the Foundation of Light and Shildon Football Club which will ultimately offer real opportunities for young players to access a strong football pathway. The work previously done by Chris Hughes and the team involved with the Development Centre at Shildon Football Club has created a strong club ethos and I see my role now expanding on that, helping it continue to grow in terms of both numbers but also the quality of coaching young players are accessing. The support of the 1st team manager is vital in ensuring the football pathway is there for our young players and initial meetings with Dan Moore have proved very positive so we are all really excited to what we can achieve in the coming weeks, months and years.”

Speaking to the website Chris added “It is with regret and happiness that I am stepping down from my role as director of Football at Shildon AFC and Shildon AFC Development Centre.It is with regret as I have thoroughly enjoyed my time as a player at the club and my time helping set up aspects of the club which I hope will lead to the club being more sustainable in the future.

I am also happy due to the fact my time with Middlesbrough FC has meant that I could not give the required effort to the responsibilities a Director of Football has. Having someone in place with more time will only improve the current provision at the club. I would like to wish all of the board members, staff, players and more importantly the supporters success in the future. Working behind the scenes at the club has opened my eyes to the amount of voluntary work that goes on to allow the team to be as successful as they are. I hope the club can continue to grow and continue to engage the community at youth and first-team level.

I am moving into the area very soon and I look forward to calling into Dean Street to catch up in the near future.”