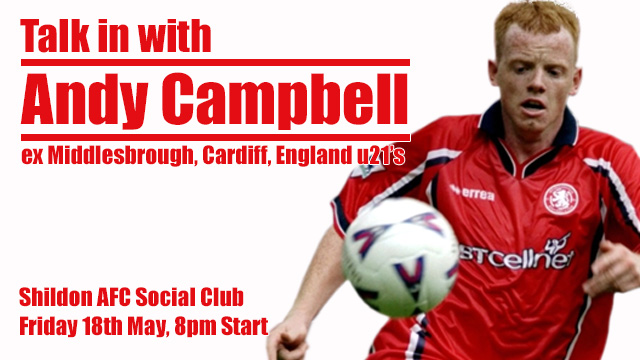 Talk in with Andy Campbell at Shildon AFC Social Club

There will be a talk in with former Middlesbrough FC Striker Andy Campbell on Friday 18th May, 8pm Start

Entry is free and all are welcome to attend.

Born in Middlesbrough, Campbell started his career with his hometown team Middlesbrough, whom he left for Cardiff City for £1m. Some of his career highlights include scoring against Manchester United in the FA Cup in a 2–0 win for Middlesbrough, and also playing for his country at under 21 level. His Cardiff career got off to an explosive start, scoring 6 times in his first 4 appearances. He scored once on his debut against Northampton, twice on his third appearance against Blackpool and a hat-trick in his fourth appearance against Oldham. Overall, he had two fairly productive years at the beginning of his spell at Ninian Park, including a fine lob over goalkeeper Chris Day at the Millennium Stadium to give Cardiff a play-off victory over Queens Park Rangers to put them into the Football League Championship.