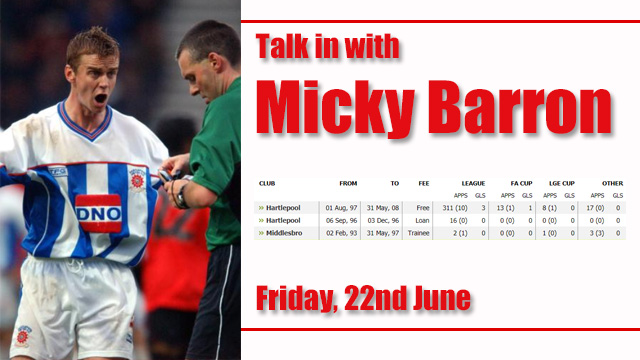 Talk in with Micky Barron at Shildon AFC Social Club

Our series of hugely successful talk ins will conclude on Friday June 22nd when our guest speaker will be our very own Micky Barron.

Micky started his career at Middlesbrough. Spending four years at the club before going out on loan to Hartlepool United. Micky made his debut for Hartlepool against Carlisle United. During his loan spell Barron made 14 appearances. Middlesbrough then released Barron and he signed permanently for Hartlepool.

He was in the Hartlepool side that had three consecutive Football League Third Division play-off semi-final defeats before winning promotion in 2002–03 but being pipped to the league title by Rushden & Diamonds.

He led out the Hartlepool team as captain in their League One play-off final in May 2005 against Sheffield Wednesday where a late equaliser eight minutes from time denied Pools their first ever promotion to the Championship, Hartlepool went on to lose in extra-time 4–2 in front of a crowd of 59,808 at the Millennium Stadium.

To celebrate 10 seasons with the club, a series of events were held such as testimonial dinner with Bobby Robson as guest speaker. Barron could only attend the later stages of the dinner as he was involved in a reserve team match while trying to make his comeback from injury. A testimonial game, against Leeds United which Hartlepool won 2–1, was also held.During his time on the sidelines, he became a regular special guest commentator on Pool’s World, the Hartlepool United audio commentary service.

It promises to be an entertaining evening.