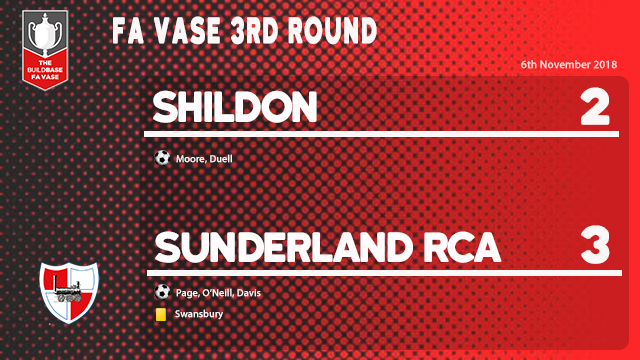 Shildon are out of the FA Vase after a 3-2 defeat against Sunderland RCA.

Shildon controlled most of the 1st half and deservedly took the lead when Daniel Moore struck a shot low into the bottom corner.

In the second half Sunderland RCA upped the tempo and took the lead. First Page rounded Newbrook in the Shildon goal to level, then O’Neill gave Sunderland RCA the lead. Aaron Duell then leveled for the home side with a shot from outside the box with 8 minutes remaining.

In the 94th minute of the game, Shildon gave away a free kick just outside the box, eventually the ball landed at the feet of Davis who shot past Newbrook.