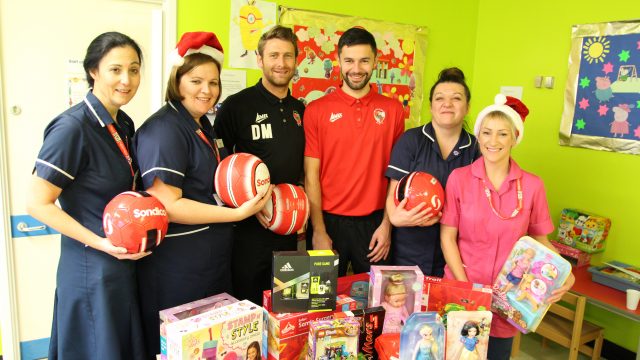 Shildon AFC pay a visit to the Children’s Ward

Manager and players visited the Children’s Ward at Darlington Memorial Hospital this week to spread a little Christmas cheer.

Shildon AFC manager Daniel Moore and his captain Ben Trotter dropped in with some presents made possible through funding from Shildon AFC, their players, the Supporters Club, homes and communities organisation Livin, Shildon Development Centre, and Chairman David Dent and his wife Diane.

Daniel Moore said: “It’s nice to put a smile on their faces when they are having a bit of a tough time.  It is something that we can give back.  The afternoon went really well and we were able to leave some presents for children who might have to visit the ward over the Christmas period too.” Jayne Auld, ward manager, said, “We are very grateful for the gifts which we know will be very welcomed by the children and their families.”