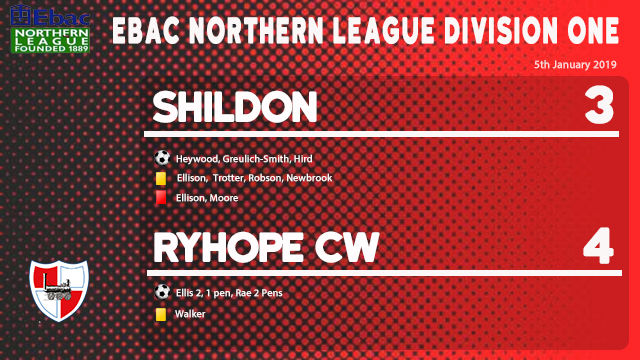 Shildon started 2019 with a 4-3 defeat to Ryhope CW and finished the game with 9 men.

Northern League Top Scorer James Ellis gave Ryhope the lead after 19mins with an excellent strike into the top corner of the net from the edge of the box.

Aidan Heywood brought Shildon level firing into the top of the net after 37mins and so it stayed to half time.

Ellis doubled his and Ryhope’s tally with a penalty to the right hand bottom corner after 54mins. Billy Greulich-Smith levelled the scores again after 63mins with a well taken goal.

Mickey Rae then scored two further penalties the second of which saw Marc Ellison gets his second yellow after a foul on a Ryhope attacker.

With 3 minutes left Brad Hird scored after a scramble in the box to give Shildon hope, but, in the aftermath of the goal, Daniel Moore was sent off trying to retrieve the ball from the goalkeeper.